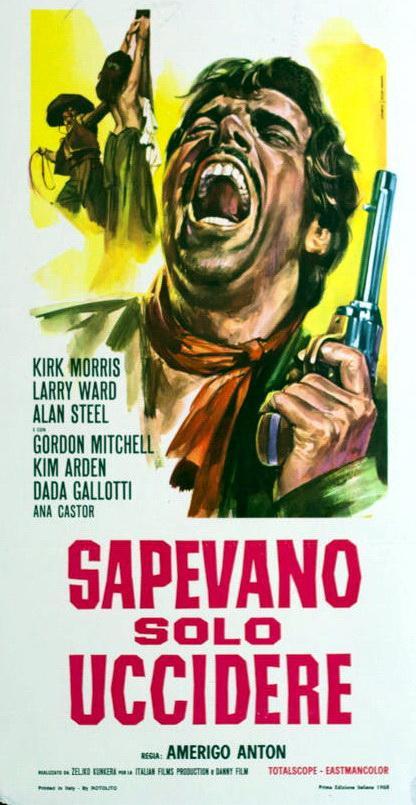 I'll Die for Vengeance is the third of four spaghetti westerns directed by Tanio Boccia, the man who gave us the very enjoyable Kill the Wickeds. In his home country Boccia is known a man who could do miracles with small budgets; some of his movies are said to be awful, some really good: Kill the Wickeds is often called his best movie, this one is no doubt among the worst.

Italian muscle man Kirk Morris (birthname: Adriano Bellini) is Jeff, a young cowboy whose best friend is killed by a gang of pissed-off Mexican bandits who are on the way back from a failed bank robbery (everything went well, but the safe was empty). Jeff himself is wounded but nursed back to health by a friedly family of farmers. Jeff applies for the job of deputy sheriff in a border town, so he can shoot the Mexicans legally when they cross the border. But there are a few complications: The Mexicans have an accomplice in town, a criminal mastermind who’s the architect of all their activities. He is known by the name of Saguaro (which is also the alternative title of the movie) but nobody has ever seen his face ...

According to Marco Giusti this movie is a remake, in western form, of a peplum movie called Sansone contro i pirati, also starring Morris and also directed by Boccia (*1). Sansone is Samson in Italian, but apparently the film was not set in Biblical times, but in the Carribean, anno 1630. In this remake the Carribean has become the American-Mexican border and the pirates have become bandidos launching their attacks on horseback. Some Cucaracha-kind-of-music is played every time they ride out and when they’re spotted in the distance, women and children quickly seek shelter, crying: The Mexicans are coming! The Mexicans are coming! I wouldn't like to accuse Boccia of racial prejudice, but subtle it ain’t. Anyway, what might have worked in a pirate movie ("The pirates are coming!" seems a logical reaction when the black flag is spotted in the distance) doesn’t work here.

Chunky muscle man Morris looks like a younger, more muscular version of Hoss Cartwright. The film has a bit of everything: fistfights, romance, murder, mayhem, even an under water scene (no doubt a relic of the pirate days of the movie). On the plus side we get a brief but tickling flagellation scene involging a señorita with a well-shaped back. Gordon Mitchell has an entertaining cameo as a black-clad cardsharp with bleached hair, but I had no idea what he was doing in the movie, apart from being shot and blowing up a few opponents with dynamite.

Forgettable stuff, for completists only.

Retrieved from "https://www.spaghetti-western.net/index.php?title=I%27ll_Die_for_Vengeance_Review&oldid=114834"
Categories:
Cookies help us deliver our services. By using our services, you agree to our use of cookies.