I Want Him Dead Review 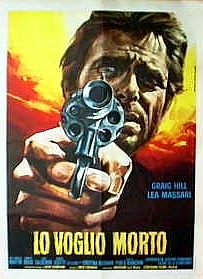 Clayton, (Craig Hill) a former scout for the Confederacy, seeks revenge after his sister is raped and murdered by local bad guy Jack Blood (Jose Manuel Martin). His search for Blood is complicated by the fact that the villain works for a ruthless capitalist named Mellek (Andrea Bosic) who has plans to prolong the civil war for his own economic ends by assassinating two generals who are meeting to discuss peace terms. Jack Blood is the man Mellek appoints to carry out these assassinations and Clayton's pursuit of him leads him into deeper and more difficult waters as the two plot lines converge.

I Want Him Dead, considered by many to be Craig Hill's best Spaghetti Western, is nothing if not an interesting mix. The direction is sometimes inspired and at other times sloppy. It enjoys a good cast who offer some solid work but are occasionally under utilised. It has two plots for the price of one but somehow doesn't mesh them successfully enough. Yet despite its various failings it manages to stay consistantly interesting and is, ultimately, a Spaghetti well worth seeing.

The opening scene, before the credits, is a perfect example of the film's strengths and weaknesses. Clayton and his sister are riding through the desert. As they sit around their fire in the evening a seemingly riderless horse runs towards them. In a series of jump cuts using reflections, close ups and depth of field so profound it gives an almost fish eye effect Clayton becomes aware of impending danger and then dispatches two assailants with explosive and clinical skill. This opening sequence is carried off with consumate flair and skill but goes completely unexplained in the ensuing narrative. It stands alone as an inexplicable episode that has no obvious connection with anything else in the film but sets a mood which carries the viewer onwards wanting more. Unfortunately, it also sets a standard which is not always lived up to as the film continues and with the bar set this high every drop in quality becomes held in greater focus. This is a pity as the film is, in general, an enjoyable piece. It just lacks consistancy. 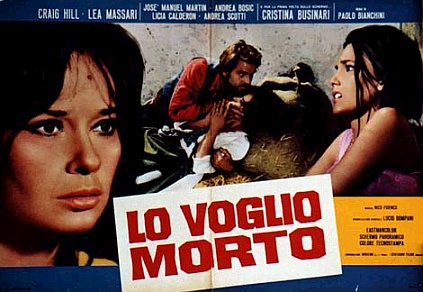 On the positive side, it genuinely is one of Craig Hill's better spaghettis. I would personally rank it alongside A Taste of Killing as my personal favourite of his. His pale eyed, steely look (a kind of cross between Franco Nero and Terence Hill) is perfectly suited to this tale of intrigue and revenge. A vehicle which requires him to do what he is best at; stay quiet and look cool. A feat he achieves successfully despite a questionable choice of hat. A straw woven object which he struggles to keep on his head while riding on occasion. In all seriousness, Hill plays his part well and benefits from the accompanying performances of the ever reliable Jose Manuel Martin as the main villain and the impressive Lea Massari, who carries off the part of the downtrodden but resilient captive servant girl with an effective balance of strength and vulnerability. In fact, in many ways Massari's is the stand out performance of the film. Her acting is impressive and she brings a genuine lift to every scene she is in. Jose Manuel Martin is always good value of course but I couldn't help but feel that in a role as central as this one for him he could of been used a bit more and his villainy expressed a shade more often. After his initial, almost casual rape and murder of Hill's sister (commited offscreen) he becomes little more than a worried looking fugitive. He is far better suited to the role of a fox than a rabbit.

Part of the problem here is that I Want Him Dead is actually two stories in one. The first is the straight forward revenge tale of Hill pursuing his sister's attackers. But this is eventually overlapped by the parallel plot of Mellek's greed driven assassination plan. And although this remains effectively a sub plot it gradually becomes more and more central. Martin's character is the link between the two plot lines and, consequently, this should make his role stronger. However, what happens is the two strands never really converge effectively and so the power of his character is diminished and lost a little. This is a pity as Martin is a gift to any film of this type and the opportunity was there to marry the two stories with greater impact. As it is, they come together in the showdown between Martin and Hill at the moment the assassination is supposed to take place but quickly split again; with the other gang members and Mellek having a denouement of their own, quite separate from that of our hero and villain. This lack of cohesion doesn't grate so much as to ruin the film but it certainly is an opportunity missed and, for me, is another example of how the film misses out on being truly outstanding.

That said, it is a thoroughly enjoyable film on the whole. The strengths of the lead players are more than enough to carry the viewer happily through the narrative despite any of its faults and the camera work, framing and composition of Bianchini and director of photography, Ricardo Andreu, are, at times, outstanding. Indeed, the film is visually nothing short of excellent and offers some truly memorable shots which, in tandem with Nico Fidenco's solid score, give it some much needed weight. 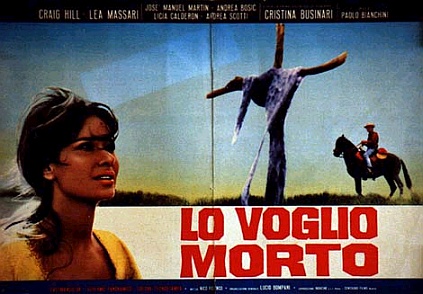 I Want Him Dead is, I think, best described as a mixed bag and your response to it is likely to be driven strongly by the preset convictions you bring with you. If you are a Craig Hill fan you are likely to see this as an excellent example of what he was capable of when given the right vehicle. If a Jose Manuel Martin fan you are just as likely to come away with mixed feelings; nice to see him in a larger role, sad to see him ultimately under utilised. If you are easily swayed by strong visual composition and effective framing this film will ring all your bells. If sloppy editing puts you off, those ringing bells will be dulled somewhat. And if, like me, you fall into all those camps, you may well come away from the film feeling an equal sense of satisfaction and disappointment. A film with some genuinely memorable moments, let down on occasion by easily avoided lapses. On balance though, a pretty decent spaghetti. By no means perfect but well worth an hour and a half of anyone's time and one which I have no trouble in recommending.

Retrieved from "https://www.spaghetti-western.net/index.php?title=I_Want_Him_Dead_Review&oldid=48380"
Category:
Cookies help us deliver our services. By using our services, you agree to our use of cookies.