If you meet Sartana, pray for your Death Review

Made on a shoestring, this became one of the most lucrative and influential ventures in the history of the spaghetti western. It pushed the industry towards a more tongue in-cheek-approach of the genre (soon degenerating into parody and slapstick), gave us the charismatic (an enigmatic) black clad anti-hero Sartana, and multiplied the salary of its star by a factor of ten: Gianni Garko was signed for 2 million Lire for this movie, but was soon able to ask 20 million for the same part in the sequels. Don't get too excited, this was still only $ 200,000. In Italy, in those days, nearly everybody was a millionaire.

One of the other things the movie did, was creating a subgenre of tongue-in-cheek spaghetti westerns with virtually incomprehensible scripts. Watching a Sartana movie can be as puzzling as studying the latest developments in quantum physics. The story of this first Sartana movie is more or less as follows: several dignitaries, among them the bank director, organize an insurance swindle by hiring a) a Mexican gang, led by Tampico, to steal a strong-box, b) an American gang, led by Lasky, to kill the Mexicans, and c) Lasky to kill all his own men (and come back alone). Or maybe Lasky wasn't hired to do that, but just did it and obtained a fair price for it. Anyway, to make things even more complicated, the strong-box is filled with rocks when opened by Lasky, and there's also a mysterious stranger, called Sartana, who starts putting his nose into everything. I know some people have watched the film several times in order to unravel the inextricable plot, but I guess all interpretations will leave some loose ends. 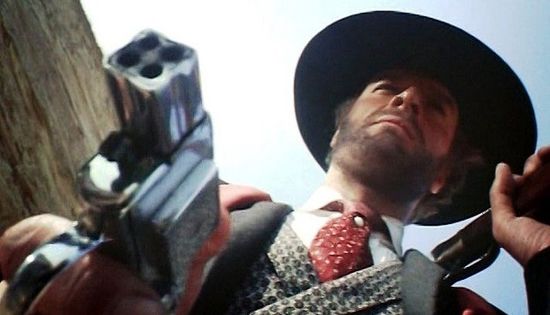 The original director of the movie was Guido Zurli - who had also contributed to the script - but he fell out with Aldo Addobati, the film's producer, and was replaced by Gianfranco Parolini. Apparently it was Zurli who brought in Gianni Garko, not Parolini (1). This could explain the near-lack of acrobatic action scenes, one of the main characteristics of Parolini's so-called "circus westerns". In the first draughts, Sartana was a more Zorro-like character, but he was further developed by both Garko and Parolini. They soon agreed it was wiser not to give anything away about Sartana's background, and let the audience guess, like his opponents, who and what he was, a bounty hunter, an insurance agent, or even a ghost. One of his opponents, Lasky, seems to think he has supernatural powers and the finale, set in the gravedigger's workshop, is strongly influenced by horror movies. Parolini, who liked the Bond movies, came up with the idea of the ultra-cool props like the four-barrel Derringer with the playing-cards cylinder. Another source of inspiration, was the cartoon Mandrake the Magician, hence the cloak and his mysterious appearances. The film spawned four sequels, but like Zurli, Parolini soon fell out with Addobbati, and the sequels were directed by Giuliano Carnimeo (*2).

The first Sartana is ferociously violent, and even though it’s tongue-in-cheek it lacks the light-hearted touch of the Carnimeo sequels. It also lacks their better production values. The well-known Villa Mussolini was used as the hacienda of Mexican villain Tampico but the use of sandpits to suggest a desert setting give the film a cheap, occasionally ugly look. But of all Sartanas, this one offers the most exciting mix of black humor and violence, and it also has the best supporting cast: Kinski, Berger, Sancho, Chaplin (well, Sidney, not Charlie ...). Berger overdoes things a little as the womanizing (but secretly homosexual?) Lasky, a slimy heavy if there ever was one, but Fernando Sancho has the time of his life as (and I hope I get this right!) José Manuel Francisco Mendoza Montezuma de la Plata Carezza Rodriguez, generally known as Tampico. It is, of course, in the first place Garko's movie. No one can say a line like "I'm your pallbearer" like Gianni Garko, the one and only real Sartana. Sergio Leone had his doubts about the movie. He had heard how people in the streets had corrupted its title to 'Se incontri Sartana, digli che è un stronzo' (If you meet Sartana, tell him he's an asshole); to Leone this was a sign that the glory days of the genre were over.

(*2) Garko appeared in three of the sequels, but in-between he was once replaced by George Hilton.

Retrieved from "https://www.spaghetti-western.net/index.php?title=If_you_meet_Sartana,_pray_for_your_Death_Review&oldid=109637"
Category:
Cookies help us deliver our services. By using our services, you agree to our use of cookies.