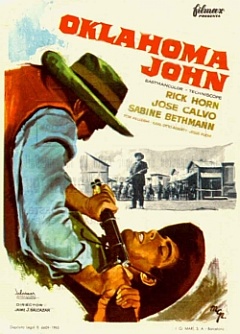 A new sheriff (Oklahoma John or Dan - or Oklahoma for short, he says, though most of the cast refer to him as Dan) arrives in town and walks smack into trouble. He's determined to clean up the town and put an end to the reign of terror perpetrated by the hired hands (and bratty, drunken son) of local despotic landowner Edwards. Gaining two unlikely "deputies", he also investigates the murder of the father of local girl (and potential love interest) Georgina White. The main suspects are Edwards, head ranch hand Hondo, perpetually drunk and whining son Jim and an oily saloon owner called Watson (who warns him not to put the moves on Georgina). - Silver

Nothing remarkable here but competently done. The sheriff looks a bit on the dim side and seems a little too lighthearted in manner, but that's a minor quibble - Silver