In a Colt's Shadow Film Review 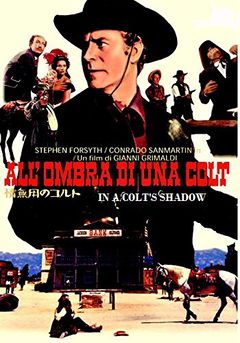 In a Colt's Shadow

A fairly interesting early genre outing, with influences of Hollywood and Samurai movies. Steve and Duke, two pistoleros, fall out after Steve, the younger of the two, asks Duke’s daughter Susan to become his wife, against her father’s wishes. After the marriage Steve buries his gun and promises to lead a peaceful life, but he's forced to dig it up when his Duke rides into town

You don't see that very often, a romantic spaghetti western. But that's what you get in this early genre entry. In 1965 the classic American approach to the genre was still a source of inspiration for Italian film makers, but Leone's cynical, tongue-in-cheek approach started to shine through. Wearing a lily white shirt throughout the movie, the hero in Gianni Grimaldi's In a Colt's Shadow (See Database Page), played by Canadian actor Stephen Forsyth, has a remarkably clean look, completely unlike Clint's unshaven poncho-clad anti-hero from the Dollars trilogy, but he can shoot behind his back with utmost precision, without looking over his shoulder, which unmistakably identifies him as a spaghetti western hero. We all know these spaghetti guys could shoot twelve opponents with only six bullets, eyes closed.

The opening scene is a nice amalgam of influences. In a clear reference to The Magnificent Seven, two pistoleros rid a Mexican town of an outlaw gang terrorizing it. Sturges' movie is of course a Hollywood classic, but like Leone's A Fistful of Dollars it was based on a Kurosawa movie. Every now and then director Grimaldi comes up with elements taken from classic Hollywood westerns or Samurai movies. Forsyth wants to settle down as a farmer in a valley where newcomers and small farmers aren't exactly welcomed (shades of Shane) and halfway the movie we get a shot of an opening door, creating a dark frame around a figure of a man nearing the house in bright sunlight, that is very reminiscent of the opening scene of John Ford's The Searchers. But we also have some existentialist talk about the condition of the pistolero, which seems a far echo - the six-shooter replacing the Samurai sword - from oriental action movies dealing with the opposition between the farmer, the man living of the land, and the samurai, the man living by his sword.

The premise of the movie is quite simple: the older one of the two pistoleros, Duke, is seriously wounded during the shootout in the Mexican village, dons his share of the money to the younger man, Steve. Knowing that his daughter and Steve have fallen in love, he orders the young man to give up his plans to marry the girl. Duke knows that a professional gunman won't ever be able to give up his gun, because trouble will always follow him. For this reason Steve is unsuited to make his daughter happy. Of course Steve ignores all instructions and settles down with his young bride in a valley coveted by two corrupt bankers, who'll do everything to chase the young couple away. Despite being menaced repeatedly, Steve decides to bury his gun in the ground behind his farm, but then Duke turns up in town and challenges Steve to a duel at sunrise …

In a Colt’s Shadow was praised for its well-conceived script. Some scenes (especially those involving Anna Maria Polani) are pretty schmaltzy and overall the movie might be a bit too talkative to some people's taste. It's also a bit of a slow burner, but the great action scene near the end is truly spectacular, with Grimaldi paying homage to Leone with a protracted build up to what is supposed to be a duel, but flows into a large scale showdown. The parallels drawn between the pistolero and the samurai occasionally feel a little artificial; their respective roles in society were different and a gunman could become a farmer (if he could afford a ranch and was ready to learn the trade) without giving up his gun. But the conflict between the younger man (who wants to settle down) and the older man (who thinks it’s unable to change) is well-handled. Frank Ressel (most people will know him from Sabata) is at his slimy best as the main villain, but I was even more intrigued by Franco Lantieri, as Ressel's business partner, a grumpy, short-tempered man frustrated about his wooden hand. The trio is completed by Helga Line as the treacherous Fabienne, Duke's love interest who secretly prefers Steve and vows revenge after she is rejected by him.

The film is also noteworthy for the lovely credit sequence which no doubt ranks among the finest of the genre. A ‘spoken theme song' (which somehow reminded me a little of Johnny Cash) is played over a series of painted graphics. The lyrics are a bit corny, to put it mildly:

I wanna feel, between my fingers, the warm wood of a plough

The prickly ears of grain, the silky soft hair of my woman