In a Colt's Shadow Review 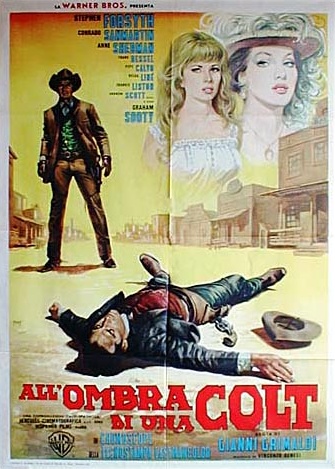 In the early days of the Italian Western cycle there were a number of films which leaned heavily on the previous American style. Most films produced in 1963 and 64 fell into this category but after the success of Fistful of Dollars the distinctive 'Spaghetti' styling we have come to enjoy began to develop and the productions which followed in 1965 and 66 were influenced as much by Leone and Corbucci as by their U.S predecessors. But the manner of the traditional U.S western still cast a long shadow during these transition years and a number of films from around this time showed an equal bias between their American and European roots. In a Colt's Shadow is a perfect example of this duality; a western which pays equal homage to the godfathers of both camps: Sergio Leone and John Ford.

Two pistoleros, Steve Blaine (Stephen Forsyth) and Duke Buchanan (Conrado San Martin) rid a Mexican village of their bandit oppressors but in the gun battle Duke is seriously wounded. He gives his share of their fee to his younger partner but, knowing that Blaine intends to marry his daughter and retire to a farm, stipulates that he must stay away from the girl or face his wrath. Blaine ignores the older man's instructions and sets out for a new life with Duke's daughter (Anna Maria Pollani) in tow. Unfortunately, they wind up in a town run by two corrupt bankers; Jackson (Franco Ressel) and Burns (Franco Lantieri) and Blaine is forced to use the gun he had hoped to put away for good. Moreover, once Duke recovers and hears of the young love birds plans he sets out to catch up with them and make Blaine pay for his defiance.

As mentioned above, In a Colt's Shadow has much of its look and feel in the older American style and, to begin with at least, this does not do it any favours. I'm a big fan of U.S westerns but when their style is simply aped it rarely comes off without appearing corny and false. The opening dialogue in this film between the two pistoleros for example is painfully wordy and wooden and the viewer could easily be forgiven for thinking that the rest of the film would be as clunky. And in fact in some scenes this proves to be so. But as the story progresses the 'Italian-ness' of the piece forces its way through. For all the hero's stiff conventionality the villains in this movie are pure Spaghetti and the action scenes and final showdown are superbly executed with a flair and vigour rarely seen in Hollywood films of the period. What results is a real hybrid with overt nods in the direction of both styles.

Giovanni Grimaldi was principally a writer rather than a director so it is not surprising that his style behind the camera is somewhat derivative in its nature but his cinematic quotes, though obvious, are quite pleasurable to behold and are well crafted and integrated into the narrative. The opening door of the ranch house, shot from the interior to reveal a stark black frame around a figure bathed in bright exterior light is lifted straight from John Ford's The Searchers but an interesting twist is added by the inclusion of violence in the frame. A shot that is repeated for good measure with two gunmen instead of one a little later. He makes an equally overt reference to Leone's style however in the final showdown scene where the build up is drawn out, squeezing every last drop of expectation possible from the increasing tension. Unfortunately, much of this good work is undermined by a somewhat syrupy ending but when considered as a whole it's a pretty solid piece. The visuals are good, which could well be the work of cinematographer Stelvio Massi as much as Grimaldi, and the score from Nico Fidenco fits well. 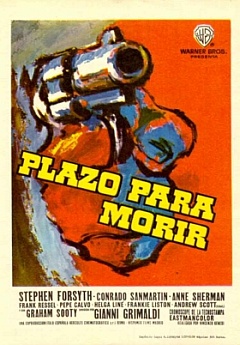 But the element which struck me most was the interesting cast. The film's lead, Canadian actor Stephen Forsyth, was possibly the least interesting on show. Although in real life he is an intriguing figure. After making around a dozen films in Italy including a few unexceptional westerns and the more celebrated Hatchet for a Honeymoon with Mario Bava, he moved to New York and carved out a career for himself as a multi media artist. Working as photographer, actor, musician, poet, choreographer and performance and video artist. Difficult to imagine from his somewhat one dimensional performance here that he was so multi faceted. Thankfully though, he is playing opposite a plethora of stalwart Spaghetti baddies in this film and they provide some wonderfully eccentric moments. Franco Ressel, a firm favourite of mine, offers perhaps the most compelling performance. A tight wound ball of arrogance, sadism and conceit he explodes at one stage in a magnificent torrent of rage and unleashed frustration, whipping frantically with a switch at an inanimate wooden post like some demented and ill equipped lumberjack. Franco Lantieri, as Ressel's business partner, is similarly psychotic. Manically sensitive about his wooden right hand, he shows equally unhealthy levels of spitefulness and cowardice. The former when in a position of advantage, the latter when his one good hand is under threat. I love this kind of pantomime villainy and in the context of this storyline it works perfectly. Adding much needed colour to an otherwise fairly pedestrian plotline.

Conrado San Martin plays the less featured but equally important role of Duke Buchanan with a solid level of stoic flair. A veteran of a bucket load of Spanish and Italian films, San Martin worked in just about every genre imaginable. Medieval adventures, Peplums, Eurospies, as well as a handful of Spaghettis, he also featured in a couple of Spanish Horror pieces for Jess Franco. He also made a few films with Sergio Leone. Appearing uncredited in both Once Upon a Time in the West and Fistful of Dynamite but also in a featured role in Leone's first film as director, The Colossus of Rhodes. Such experience shows through in his largely understated performance and despite the poor level of dialogue he has to work with (judging by the english dub at least) he carries off his part well and I would like to have seen more of him.

As for the female performers, well Anna Maria Pollani is not given much to work with. Her role as romantic squeeze and disobedient daughter is unfortunately more passive than it could have been but the void is more than filled by the bad girl of the piece played by Helga Line. Her saloon girl, Fabienne, is treacherous, conniving and self seeking so Miss Line has a much better role to get her teeth into and she does a fine job. Although I must say things could have been improved even further had her part been filled by Rosalba Neri. An unfair slight on Helga perhaps, but I can't help but fantasize.

In general terms I think it is fair to say that In a Colt's Shadow is something of a mixed bag. An American style western but with strong spaghetti flavour; a well staged action film which is sometimes too wordy and sickly cliched; a largely derivative styled genre piece with some genuinely well crafted visuals. It is all these things and more. But I think, for me, its strengths outweigh its weaknesses and helped along by some strong performances in key roles and some genuinely impressive stunt work during its excellent action sequences I found it to be a good example of the earlier stages of the Italian Western cycle and a film I thoroughly enjoyed as a result.

The version I watched of this film was the excellent Imagica edition. Very nice widescreen picture which really showed the film's visual style off at its best. Certainly the recommended edition if you can get it or a copy thereof. --Phil H 13:28, 5 March 2009 (UTC)