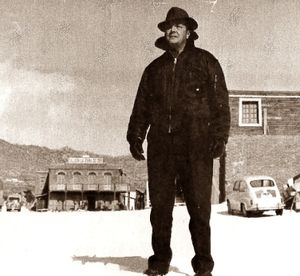 Joaquín Luis Romero Marchent, who died at the age of 90 on August 17, 2012 (only nine days short of his 91st birthday) was born in Madrid, on August 16, 1921. His father was the founder and editor of the famous magazine Radio Cinema, published between 1938 and 1963, and the co-founder of the production company Intercontinental Films. He was the brother of director Rafael Romero Marchent, the actor Carlos Romero Marchent and the editor Anna Romero Marchent.

Before he was finally able to direct his first movie in 1953, a comedy thriller called Juzgado permanente, he had worked as an assistant-producer and assistant director on various movie productions. In 1955 he directed one of the earliest westerns ever produced in Europe, El Coyote, based on a popular novel by José Mallorquí. After a side-leap to Neorealism, he quickly returned to his first love, the western, with a couple of Zorro movies, La Venganza del Zorro (1961) and Cabalgando hacia la Muerte (L'ombra di Zorro, 1962). In the years to come, he would make two movies that are today ranked among the best pre-Leone westerns and often called the best westerns ever made by a Spanish director.

The first one, El Sabor de la Venganza, is a revenge story Spanish style. It tells the story of three young boys, who must witness how their father is murdered. Their mother asks them to swear on their father’s grave that they will revenge his death once they have reached adult age. What marks the movie as a pre-Leone western, is the fact that the son who wants to work within the law and brings the murderers of his father to justice, is the real hero of the movie. The trigger-happy, vengeful brother dies in the arms of his mother, who has set him on the path of revenge (an idea some Spanish critics were opposed to).

Many fans think his next western, Antes llega la Muerte, is his masterpiece. It's a beautifully executed, semi-autobiographical western, about a man who undertakes a dangerous journey to save the life of his young wife, who is diagnosed with a deadly tumor. Joaquín's own mother had died shortly before of lung cancer, and the family had tried everything, even visiting a magic healer, to save her. The movie's finale, set around a small well in the middle of the desert, is a small movie on its own and an absolute genre highlight.

The first half of the sixties were the golden age of the Spanish western. In the second half of the decade, the Spanish industry of genre movies, was nearly eclipsed by their South-European neighbors from across the Alpes, but Joaquín went on directing westerns, such as the ambitious Fedra West, based on the classic Greek tragedy Phaedra, and the pseudo-western, set in contemporary South America, El Aventurero de Guaynas. He also worked as a screenwriter, either for his brother Rafael (Garringo) or for Italian directors like Enzo G. Castellari (Ammazzali tutti e torna solo). His movie 10.000 dollari per Lassiter was scripted by Sergio Donati. In 1972, when comedy westerns in the style of Trinity dominated the market, he would direct the controversial gore western Condenados a vivir (Cut-Throats Nine), that would become his most enduring success over the years.

He then drifted away from the cinema, but stayed loyal to the western genre by directing and writing various episodes of the TV series Curro Jiménez, about a Spanish folk hero. Although Jiménez was a sort of Robin Hood, the series was filmed in the style of the American western.

# A true pioneer and maestro

His westerns being Americanized and often melodramatic, it took some time before he received the praise he deserved as one of Europe's most important western pioneers. Today he is considered by most Spanish critics to be the greatest Spanish western director ever, while Antes llega la Muerte is often called the best Spanish western in history. Outside his home country, he is still too much identified with that one movie, often characterized as the 'most violent European western'. While there's nothing wrong with that movie, some of the others are unfortunately still labeled as 'undiscovered gems of the genre'.

Retrieved from "https://www.spaghetti-western.net/index.php?title=In_memoriam:_Joaquín_Luis_Romero_Marchent&oldid=111227"
Categories:
Cookies help us deliver our services. By using our services, you agree to our use of cookies.