In the Name of the Father, the Son, and the Colt Review 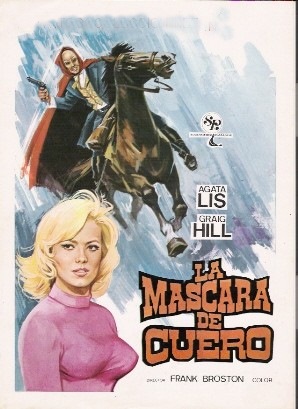 By the 70's, Polizios, Giallos, and Horror films were the top films at the Italian box office. While the Spaghetti Western was left bleeding in the moonlight. Though there was still some blood left in the old guy. But in this case, some bad blood.

These three genres had seldom coincided with each other. At least all at once. There were Poliziotteschi Giallos, and Gialloesque Spaghettis but never a Gialloesque, Poliziotteschi, Spaghetti Western. But like North Korea, the Spaghetti Western is an unpredictable bastard and it just so happens that one Spaghetti does in fact blend all three elements. And that film just so happens to have three names, In the Name of the Father, the Son, and the Colt.

Craig Hill plays dual roles as both a sheriff and a bandit. A young girl and her father have been living in happiness in a town out west for many years. After a terrible incident where their stagecoach was robbed and the girl raped by a black cloaked bandit, who is the twin of the sheriff, many years ago. Naturally, the sheriff comes under suspicion when the girl identifies him as the bandit. It's up to the Sheriff to clear his name and stop his brother once and for all.

So how could a film combining the Spaghetti Western setting, Giallo murder scenes and characters, with a Polizio plot be bad? Simple. It's just very poorly made. It doesn't have the cheapness of a Fidani, Crea, or Solvoy; but it does have similar filmmaking skills. The film has a reasonable and somewhat coherent story that isn't really out of the norm, but it is told with such half assed enthusiasm that it's also hard for the viewer to care. Bianchi seems much more interested in his genre bending stylization than the film itself. The main problem being that the film is more style than plot. Or should I say, attempted style. The Giallo scenes feel very thrown in to me as they are very contrasting to the rhythm of the plot. Or maybe that the Spaghetti Western type characters feel out of place in a Giallo. But at one moment we're outside in a very sunny town (Fistful set), and then we're in a darkened room with a masked killer interrogating a prostitute. The two don't mesh in my mind.

Among the stylistic and atmospheric contrast is the very very stupid ideas that the script writers come up with. Though, I might add, these ideas would be much better in a proper Giallo. The main idea I'm talking about is the inclusion of the masked man. Who is he? What is he going to do? Why is he here? Who gives a shit? Not me. Which is a pity for most viewers as the film feeds off of our questions but the whole fact that a masked man in a cape is riding around the machismo laden West is just too much to take seriously. Sure, there is the open mind tactic but it doesn't really work when it insults your intelligence.

Beyond the fact that the Giallo scenes are very thrown in and seem rather pointless, they also lack any contribution to the film's atmosphere. In fact, the film seems to have very little atmosphere. A film like Price of Death, which is a Giallo like Spaghetti has a very strong atmosphere. Thanks in large part to Mario Migliardi and his score. But here, the film feels empty and like an unfinished film. Possibly because of the poor editing. The finale gunfight should be exciting but it is very poorly edited and is instead, a flurry of undecipherable gunshots.

But I do give the film credit for trying. It's not a comedy, thank god, and the filmmakers do seem to have a clear knowledge of what the audience wants and expects while still making a Western. But it is just too cheesy and poorly made to be anything more than bad. --Korano 05:36, 9 October 2009 (UTC)

Retrieved from "https://www.spaghetti-western.net/index.php?title=In_the_Name_of_the_Father,_the_Son,_and_the_Colt_Review&oldid=51436"
Category:
Cookies help us deliver our services. By using our services, you agree to our use of cookies.