On the release of his new book on the Italian Western Genre, 10,000 Ways To Die: A Director's Take On The Spaghetti Western, writer and director Alex Cox spoke with Phil Hardcastle on the roots of his Spaghetti inclinations, his latest film project and, of course, the book 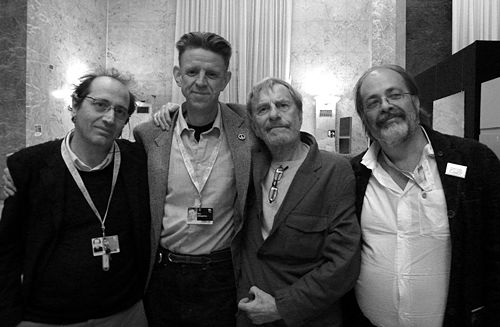 PH: It’s always good to see a new book on Italian westerns and yours is structured very differently to most that have come before. It doesn’t try to be an encyclopaedia but rather is set out chronologically and focuses very much on analysing the films individually rather than thematically. This is quite different to your original university thesis of the same name. What led you to approach the work in this way?

AC: My original attempt was made when I was a critical studies student at UCLA and was laden down with the trappings of semiology and 'symbols'. Now I'm no longer obliged to swim in these channels, it seemed easier and clearer to look at the form as it developed over time. This also gave me an excuse to watch more than 100 DVDs and video tapes in chronological order, which for some mad reason I thought was a good idea. (My old book, retitled MASSACRE TIME, is still downloadable via my site. But the new one is better)

PH: It also appears that, although Leone gets plenty of coverage, Corbucci’s work is the central pin that runs throughout the book. Was that deliberate or just due to his being more prolific?

AC: There are plenty of books about Leone already! He alone among the Spaghetti directors has been granted 'official' status by the mavens of popular culture. But I find Corbucci equally interesting as a director, more complex in some ways; and as a film director I tend to put myself in these guys' places and imagine, how would I feel if my best work (DJANGO and BIG SILENCE) was pretty much unseen and suppressed, while my rubbish (JOHNNY ORO, NAVAJO JOE) got a wide distribution care of the studios? This would tend to make me cynical, I think. It certainly did in Corbucci's case.

PH: I notice also that the book is dedicated to Giulio Questi. Was that as a result of meeting him during the Western All’italiana retrospective in Venice or more about professional admiration?

AC: I always wanted to meet Questi! And what a nice man he turned out to be. In fact, all the dirctors I've met - Questi, Lizzani, Petroni, Castellari - have been very personable and approachable. Questi, for some reason, always stood out for me. His film DJANGO KILL (I know he hates that title) is so unusual: a great surrealist film. And the guy is still working, making HD videos pretty much single-handed, which I also sympathise with. Long may he continue to inspire us!

PH: A project like this must have necessitated a lot of hours spent re-watching films. Were there any that surprised you as being better or worse than you remember?

AC: I was impressed with what a truly great film BIG SILENCE is. And I liked DJANGO even more. ONCE UPON A TIME IN THE WEST holds up really well too; GOOD BAD UGLY and DUCK YOU SUCKER! less so. I don't much like Corbucci's Mexican Revolution films, either: QUIEN SABE and TEPEPA are much better.

PH: And what about new discoveries? One of the things that keeps me fascinated with the genre is the fact that despite seeing literally hundreds of these films I am still seeing films for the first time that blow me away. $10,000 Blood Money is a recent example for me. Were there any such new pleasures for you?

AC: There were some nice surprises - films I'd wanted to see, like DON'T TOUCH THE WHITE WOMAN, but hadn't been able to find. BLOOD MONEY really does hold up, doesn't it? And there were some really good films I hadn't known about - BLACK JACK, CALIFORNIA and that strange policier in which Giuliano Gemma's screen image is killing the cinema audience. Plus the opening of A SKY FULL OF STARS FOR A ROOF - which has to be one of the best Spaghetti moments of all, even if the film thereafter falls flat.

PH: A lot of UK fans had their first experiences with Spaghetti Westerns through your Moviedrome shows in the 90s. But what about you? How did you first become aware of them?

AC: My first Spaghetti experience was FOR A FEW DOLLARS MORE and FISTFUL OF DOLLARS, seen on a double bill in that order. As you can imagine, I was hooked. TODAY IT'S ME, TOMORROW YOU, ARIZONA COLT and DJANGO KILL followed -- all at the Scala cinema in Liverpool, watched through trails of cigarette smoke...

PH: You mention in your book that you saw many Spaghetti Westerns for the first time while working as an office boy in Paris. How did a Merseyside lad end up there?

AC: By studying French and going to Paris as an exchange student. The city was full of small cinemas showing second-run or B movies: le cinema 'bis'. With a copy of Pariscope and a Metro carnet, this was a young film nerd's heaven.

PH: A lot of these films were not released in the UK at the time. Which had you been able to see before going to Paris? And which did you discover that had an impact on you while you were there?

AC: The Dollars films, TODAY IT'S ME, TOMORROW YOU, ARIZONA COLT, DJANGO KILL, DEATH SENTENCE, THE BIG GUNDOWN, SABATA in England, PRICE OF POWER, REQUIESCANT, TEPEPA, ONCE UPON A TIME IN THE WEST (long version), BIG SILENCE, DUCK YOU SUCKER!, INDIO BLACK, RETURN OF SABATA, and others, in Paris.

PH: You mention in the book how the increased violence in Spaghetti Westerns was an element which drew you to them as a youngster but as someone who has remained a fan throughout your life, what do you think is their lasting appeal for you?

AC: I think it was the ATMOSPHERE of arbitary violence - where ANYTHING COULD HAPPEN, and might, which appealed to me: the violence itself wasn't particularly realistic or grisly, despite the 'official' disapproval of the censors: nothing like THE WILD BUNCH or BONNIE AND CLYE and the American action films which followed. It was this vision of a surreal, anarchic and chaotic world- and a magnificent desert landscape, at times - which drew me, and still does.

PH: One of the most interesting aspects of your book is how you analyse the films with a director’s professional eye. Are there aspects of the genre’s style which have influenced your own approach to film making?

AC: I think the idea that one should try to be very ambitious with modest resources is the one I have taken from the Italian Western. These were very big-scale, often politically radical, pictures, made - most of the time - for little money.

PH: You flirted with the Hollywood studios in the early part of your career but you are firmly established as an independent film maker now and are creating work on micro budgets. There’s some interesting parallels there in terms of how many of the Italian westerns were made and the level of creativity they managed under those financial constraints. Do you find working with low budgets stifling or liberating?

AC: It is inevitable! But it also lessens the amount of waste involved in the process, and takes up much less time.

PH: Do you think it has got harder to be an independent film maker these days though? I mean financially. The technology available would seem to offer a much more cost effective option for production but if there is no real outlet for distribution and theatrical exhibition how do you make it pay?

AC: Spaghetti westerns were often made on a shoestring but the system in place at the time made it relatively easy to recoup their costs. There was a system of distribution for low-buget, 'B' films in cinemas in those days. Now those cinemas are gone, and finding distribution is much more of a struggle.

PH: ‘Straight to Hell’ was the closest we’ve seen to a western from you. That film looked like it was a lot of fun to make. If for no other reason than playing outlaws in an Almerian ghost town and dressing Shane McGowan up in a Fernando Sancho hat. Are we likely to see a more ‘traditional’ western from you in the future?

AC: I don't know if there is currently a market for Westerns, but I am always up for Rudy Wurlitzer's script ZEBULON, even if we have to do it with hand puppets.

PH: Well the traditional target audience for westerns (young adult males) does seem to have shifted away and are more drawn to super hero, action and horror flicks these days but the occasional western still seems to make it through the mire of the Hollywood funding process. Ed Harris’ film, Appaloosa, being the most recent example. Is the problem that the genre now appeals to a more mature audience? One that doesn’t fill the multiplexes?

AC: I don't know! One would have to poll people coming out of the film and learn their demographics. But certainly the absence of a culture of Westerns means it's much harder to make a transgressive Western, or an anti-Western.

PH: You’ve recently finished shooting your latest film, ‘Repo Chick’. What can you tell us about it and when can we expect to see it released?

AC: It's funny, I hope, and it will be finished by the end of August, if the Goddess wishes.

PH: And what’s coming up next?

PH: This sounds intriguing. Can you elaborate more on that? Is this a mixture of real life and animated?

AC: The backgrounds are all sorts: toy trains, real trains, not much effort to pretend these things are 'real'. It is a lot of fun.

PH: Our readers and members are a truly international bunch. Can they expect to see you out and about promoting the book anywhere? Book signings and the like?

AC: I doubt that I'll go anywhere until REPO CHICK is done. I'm having too much fun in the cutting room.

Retrieved from "https://www.spaghetti-western.net/index.php?title=Interview_with_Alex_Cox&oldid=136970"
Categories:
Cookies help us deliver our services. By using our services, you agree to our use of cookies.