It can be done, Amigo Review 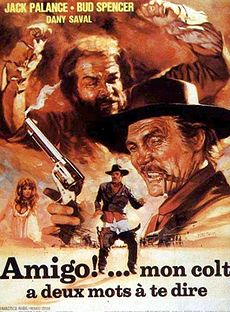 This film, Spencer’s first star vehicle without Hill, was made to settle a conflict between Enzo Barboni, director of They call me Trinity, and screenwriter Ernesto Gastaldi, who claimed to have some rights to the story that eventually led to Barboni’s smash hit with Hill & Spencer. Gastaldi had sold ‘his rights’ to producer Alfonso Sansone, and to settle things, Spencer (after all he was a lawyer) proposed to do a film for the duo Sansone-Gastaldi and Sacrosiap Films. 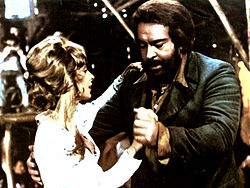 In it, Spencer plays a character called Coburn Thompson, a good-natured rogue who prefers to be alone and talk to his horse. In the opening scenes he is nearly hanged as a horse thief, but his life is saved by a lawyer because the hanging is illegal. Coburn has deflowered a beautiful young girl, and is therefore persecuted by her brother, the ‘fastest gun in the West’, who wants to save her name by having Coburn marry her first (since single moms are not respected) and kill him later (since widows enjoy some esteem in society). Note that deep down inside Coburn is a decent guy: he only deflowered the girl because he thought she was a hooker. The film tries to soften Spencer’s screen persona and introduce us to his more mellow side: he is teamed up with an orphan, and the orphan has to defend the big man as often as the big man the orphan. When the fastest gun in the West, played by no other than Jack Palance, is about to kill the man who deflowered his sister, the orphan tells him that the girl is pregnant, so Palance decides to postpone the killing until the child will have reached adult age. 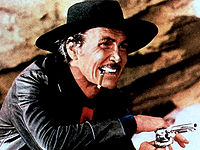 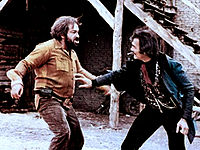 Because it was made when Spencer already was a star, but not famous enough to lure people to cinemas with his name only, the film is a bit more plot-driven than most of his later vehicles, when the only thing he was asked to do, was beating people around. Gastaldo’s story was developed by Rafael Ascona, a regular collaborator of Marco Ferreri. What makes it particularly worthwhile for genre fans, is the facts that it was partly filmed on locations used for Once upon a Time in the West. It's nice to hear one of the characters say "So this is the famous well", when they arrive at the well where Harmonica shot two of Frank's men. The script even uses some story elements of Leone's masterpiece. The orphan has inherited a seemingly useless piece of land, but some are willing to pay a considerable amount of money for it, so the kid decides to bide his time.

Although not particularly distinguished, It can be done, Amigo is good fun. It's rather slow-moving and the first twenty minutes are tedious, but it's a sympathetic family movie with a few raunchy jokes as well. Spencer is quite good as the roguish Coburn, and the child is not too irritating. As more often in a spaghetti western, Palance really hams it up as the gunslinger who is accompanied by his sister and a group of ballroom dancers. It’s not his finest hour, but he’s let down by director Lucidi, who’s direction is pretty uninspired, and the script writers: although Palance is presented as the fastest gun out West, he only gets the chance to show his abilities once; for most part of the movie, he is left to chewing cigars.

Retrieved from "https://www.spaghetti-western.net/index.php?title=It_can_be_done,_Amigo_Review&oldid=113193"
Categories:
Cookies help us deliver our services. By using our services, you agree to our use of cookies.