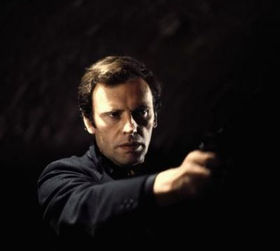 Jean-Louis Trintignant was born on December 11, 1930 in Piolenc, near Orange, in the South of France. He is from a wealthy family and as a boy he used to dream of being a race driver, like his uncle Maurice. Although he turned to acting, he had a life-long passion for racing, and in 1966 director Claude Lelouch cast him as a race car driver in Un Homme et une Femme. In 2007 he suffered a leg injury from a motorcycle accident. Poetry was a second life-long passion. With his daughter Marie - who shared this passion - he presented several theatrical shows dedicated to the poetry of Jacques Prévert, Boris Vian and Guillaume Apollinaire.

Trintignant was married twice, to actress Stéphane Audran and screenwriter and director Nadine Marquand. With Marquand he had three children, one of these was the actress Marie Trintignant. In 2003 the family made all the headlines when daughter Marie died of a cerebral oedema, as a result of being punched at least 19 times by her boyfriend, Bertand Cantat, lead singer of the French rock group Noir Désir, in a hotel room in Vilnius, Lithuania. Trintignant was himself working in Vilnius at the time, and flew his daughter, who was in a coma, over to Paris, where she died in the Universitary Hostpital of Neuilly-sur-Seine.

Trintignant first studied law, then drama in Paris. He made his acting debut in theatre and made his first appearances in cinema as a supporting actor, primarily in comedies. In 1956 he was cast next to Brigitte Bardot in Roger Vadim’s Et Dieu… créa la Femme (And God created woman), the film that turned him into a well-known young actor and Bardot into a sex symbol. He also had an affair with Bardot (who was director Vadim’s wife), which contributed a lot to his reputation as a Don Juan.

After his military service in Algeria, he returned to acting. He played MacBeth on stage and did again a few comedy roles. In 1966 he became an international star when Claude Lelouch’s Un Homme et une Femme won both the Palme d’Or in Cannes and the Oscar for Best Foreign language Film. In 1968 he received the Best Actor reward on the prestigious film festival of Berlin for his performance in Alain Robbe-Grillet’s l’Homme qui ment. In 1969 he also received The Best Actor Award at Cannes Festival for Costa Gravas’ Z.

When Sergio Corbucci asked him for The Great Silence, Trintignant was an international star, but although he had appeared in comedies and a few thrillers, he was most identified with art house movies. He was known for his laid-back, introvert acting style and soft voice. The idea to cast him as an anti-hero in a spaghetti western seemed ridiculous, but turned out to be a masterstroke.

In the course of the seventies, he briefly realized his early ambitions to become a race car driver when he participated, as a professional driver, in several rallies. After his divorce from Nadine Marquand, he started an affair with French professional race car driver Marianne Hoepfner and the two still are a couple. In the eighties he progressively set bounds to his acting career, in order to spend more time on his work in viniculture. However in 1983 he proved that he was still a fine comedy actor when he appeared alongside Fanny Ardant in François Truffaut’s delicious Vivement Dimanche! (Confidentially Yours), and four years later Claude Lelouch invited him for the nostalgic Un Homme et une Femme, vingt ans déjà.

After the death of his daughter, Jean-Louis Trintignant has led a retired life on the French country side.