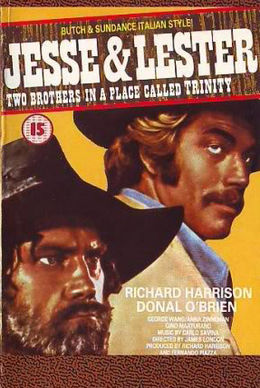 Two estranged half-brothers inherit a piece of land in a place called Trinity but have different plans with it: one wants to build a whorehouse, the other a church. One of the many comedies made in the wake of Barboni’s successes with Hill & Spencer. Harrison scripted, produced and directed it, and understandably it’s his personal favorite among the Italian westerns he appeared in.

Jesse & Lester are two half-brothers who inherit a piece of land in a place called Trinity; Jesse is a philanderer who’s also quick on the draw, Lester a Mormon who’s opposed to violence. Jesse plans to build the biggest whorehouse in the history of the West on their new property, but Lester wants to build a church, so he can spread the word of God. The two get in all kinds of trouble while trying to claim their inheritance: it has been taken by a group of miners and an assorted bunch of no-goods and bandits is also on the lurk. Finally Jesse manages to fulfill his dream with the help of a German prostitute called Helena von Schäffer, but those bandits just won’t give up and in the end even Lester is forced to take up arms.

I saw Jesse & Lester in cinema when I was a teenager and never went back to it ... until a few days ago. When asked by a newspaper journalist (preparing an article on the 50th birthday of the genre) what was the worst spaghetti western I had ever seen, I came up with this title, but then I realized that I have grown more lenient towards comedy spaghettis over the last few years. Like beauty, ugliness is in the eye of the beholder, so if I had changed, maybe the movie had changed with me. Is it still the worst of all? No, it’s certainly not as bad as some of these ultra-cheap, botched up productions, using material from other movies to reach full length, but this is a production with a good cast and a decent budget (all relatively speaking) so in a sense it might be called worse, a waste of talent, time and money.

However, the film has its defenders and one of them is Richard Harrison. No wonder: apart from starring in it, he scripted, produced and directed it. Most sources mention Renzo Genta as director, but according to Harrison he fired him after three days and took over direction himself (1). It must be said that the first twenty minutes - the two estranged brothers getting to know each other - have a certain appeal. O’Brien is occasionally funny as the gruff Mormon, a peace-loving brother who could easily scare off opponents with his angry look and beard. But once the two brothers have been characterized, the film doesn’t know where to go. We get a boxing match, a dice game, complications with property, money and claims, but it all adds up to very little and the script tries to squeeze jokes out of virtually everything, varying from underwear to a birth mark on a male bottom. The movie finally redeems itself, but only to a certain degree, with a not-so-bad shootout instead of the usual fisticuffs that go on forever.

So a decent first twenty minutes and an acceptable finale, that’s probably more than you can expect from film with such a bad reputation. The score by Carlo Savina is a bit too whimsical to my liking, but it certainly suits the movie. And if you get bored, you can always play the game called ‘spot all familiar spaghetti western faces in cameo appearances’: Ricky Boido (as a bandit called Blondie!), Luciano Rossi, George Wang, Fortunato Arena, John Bartha, they’re all there, some for a couple of minutes, others for a couple of moments. Some sources also list good old John P. Dulaney, others don’t. I wasn’t able to spot him, so I asked him if he could confirm that he was in the movie. He told me he was in the movie, positively, but wasn't able to spot himself in the final version.

Retrieved from "https://www.spaghetti-western.net/index.php?title=Jesse_and_Lester:_Two_Brothers_in_a_Place_called_Trinity_Review&oldid=108850"
Categories:
Cookies help us deliver our services. By using our services, you agree to our use of cookies.