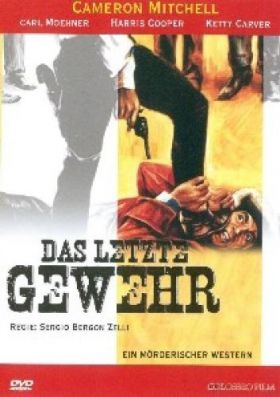 A masked avenger comes to the rescue of townspeople terrorized by bandits. One of the very first Italian westerns, a hodgepodge of a movie, historically relevant, but devoid of any real interest
_________

Often called the first solely Italian western, it was in fact the second: Albert Band's and Sergio Corbucci's Massacro al Grande Canyon has a lower registration number, but Jim il Primo was the first Italian western that was entirely filmed on Italian soil. Preceding Sergio Leone's A Fistful of Dollars (*1), it is important for historic reasons, but unfortunately it's a very modest production with little or no merit of its own.

A gang of cutthroats take over a western town, intent on stealing a gold shipment. While waiting for the gold to arrive, they start terrorizing the townspeople. Men are intimidated, women are sexually harassed, and the sheriff gets no support and is therefore powerless. A masked rider repeatedly turns up in the nick of time and some think that he is the legendary Jim Hart, the fastest gun in the West. But who is this Jim Hart really and why is he covering his face? Could it be that he is one of the townspeople? Or is it this guy called Guitar, who arrived in town in the company of the villains, but seems to have a hidden agenda?

The script is a hodgepodge of story snippets, taken from sources as various as the western serials (the Lone Rider type of avenger), the town under terror movies (the scared and passive townspeople) or a classic like Rio Bravo (the grumpy old timer, modeled after Walter Brennan's Stumpy). It all feels tossed together, without any sense of style or structure. Apparently director Bergonzelli tried to capture the feel of a Hollywood western, not to create anything new. The only signs that a new genre is making its first steps, are a particularly corny theme song (sung by Peter Tevis) and the amount of brutality towards women (it would become a recurrent theme within the genre). The bandits seem to have taken over the town for the women rather than the gold and even when they hold up a stagecoach, they try to rape one of the female passengers - the sheriff's beautiful wife - instead of stealing any money.

Apparently the masked avenger was an afterthought. Cameron Mitchell threatened to abandon the production (and finally did) because he wasn't paid at the agreed time. Director Bergonzelli then decided that this legendary gunslinger Jim Hart would be unrecognizable in most scenes, so Mitchell could be replaced by a body double if necessary (*2). No doubt this is also the reason that in post-production Mitchell's lines were dubbed by a voice actor. The character Guitar (he plays with the right hand, shoots with the left) looks promising, but Austrian actor Möhner can't speak a line without giving a chuckle and after a while this quirk becomes unbearable. The villains all seem to have ingested laughing gas because whatever's happening on-screen, murder, torture, rape, or any other sort of mayhem, they all double up with laugher.

In case you didn't get it: This one definitely falls into the category 'for completists only' 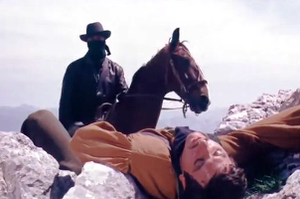 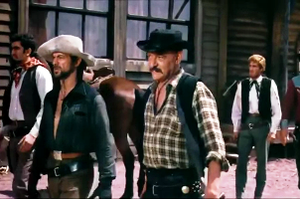 Simon Gelten is a long time contributor to the SWDb. "I'm not as old as Tom B. but I'm working on it. I hope to catch up with him by the end of the next decade.", he says. Simon saw all movies by Sergio Leone and several by Sergio Corbucci in cinema, most of the time in Eindhoven, the city where he was born. Currently, Simon is living in Turnhout, Belgium. Simon is active within the database as both Scherpschutter and his alter ego Tiratore Scelto.
Retrieved from "https://www.spaghetti-western.net/index.php?title=Jim_il_Primo_/_The_Last_Gun_Review&oldid=139706"
Category:
Cookies help us deliver our services. By using our services, you agree to our use of cookies.