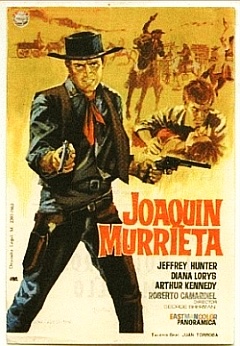 Mexican peasant Joaquin Murieta and his wife go north to California to prospect for gold, finding only one white person, a marshal, who will befriend them. But after Murieta is beaten and robbed, and his wife killed by bandits, Murieta takes out his vengeance by forming a gang of outlaws who rob the countryside. Murieta is eventually cornered by the marshal, who persuades him to end his crusade. But when Murieta is later wounded and convalescent, his gang operates a reign of terror without his knowledge.

This drama is based on the true story of a Mexican immigrant and his wife, who travel to California during the Gold Rush of 1849. Their only friend in the area is an army captain. They are taunted by a group of racist miners, and the wife is raped and murdered. The husband swears revenge, rounds up a group of men, and conducts raids on mining camps in search of the murderers, becoming a successful gambler along the way.