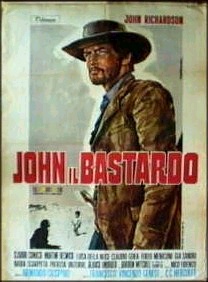 There were a number of reworkings of classic literature and mythology during the Italian Western cycle, from Odysseus to Orestes to Hamlet. These classic tales provided ready made dramas and heroes to a genre with a voracious appetite for new material. So it is no surprise that someone should adapt Don Juan, the quintessential anti hero tale into a western setting and John il Bastardo is the result.

Don Juan has become a character as synonomous with incorrigable philandering as Casanova and his story has been told and retold for generations. The most famous versions are probably Mozart's opera, Don Giovanni, and Byron's epic poem but the story was first told by the Spanish 17th century dramatist, Tirso de Molina, in his play El Burlador de Sevilla (The Trickster of Seville), and it is around this story that all others (including John il Bastardo) are based. Tirso was a priest as well as a playwright and his play was both a morality tale and an expose of the hypocrisy in contemporary Spanish society. In particular it highlighted the ephemeral nature of the honour code which dominated 'polite' society in Spain at this time and the character of Don Juan, with his refusal to acknowledge the value of anything beyond his own base desires and pleasures, was used both as an illumination of an amoral society and its sacrificial scapegoat; paying for the sins he committed openly but which others were also guilty of in a more complicit sense.

In Crispino's western adaptation, Juan (John Richardson), or in this case John, is given a tortured past which provides him with both a source for the bitterness he feels towards society and a revenge motif to hang some of his nastiness on. A bastard in both senses of the word, it turns out John is the illegitimate son of Don Diego Tenorio (Claudio Gora), a wealthy Mexican landownwer and he sets out on a journey south of the border intending to usurp his half brother Francisco (Claudio Camaso) and take possession of his inheritance. Along the way, he deflowers a couple of Mormon lasses, a daliance which has lasting repercussions as their hired assassin Danite (Gordon Mitchell) pursues him as a result, and generally behaves in an arrogant and abhorent manner at every turn. His final come uppance is inevitable if a little bizarre and it appears obvious that the writers were struggling to shoe horn in the stone statue element that is central to the traditional denouement to the tale. They manage it, but only just. A summary sentence which could be used for the film as a whole.

John il Bastardo suffers from a major problem. Its central character is so lacking in any redeeming qualities that it is impossible to connect with him on any level. Arrogant and cruel, self pitying as well as self seeking and with a chip on his shoulder the size of small planet he transcends any acceptable parameters of an anti hero and stands squarely in the zone of unlikeable villain. This is not a cheeky rogue or loveable bad boy. He is mean spirited and vain and his anguished childhood and sense of himself as unjust victim does not convince us that we should care. Rather it increases his level of self obsession and drives another wedge between him and our sympathies. This is a shame and a missed opportunity as the character of Don Juan could have been ideal for a genre which lends itself more than any other to morally questionable anti heroes. If Crispino had made his protagonist just a little more likeable and his actions just a little less despicable a better balance could have been struck and the whole film could have worked in a more satisfying way. One of the keys to Tirso's original play is that Juan's 'victims' were usually just as guilty as he in some way or another but were more hypocritical about their behaviour. This allowed Juan's open amorality to appear almost honest. In John il Bastardo however, outside of John's own kin, and possibly Papa Buck and his oafish clan, there are simply victims who are used and betrayed. Not a good recipe for audience connection.

The film does have highlights however, amongst which the performance of Glauco Onorato as John's ever faithful if stupid manservant, Morenillo, stands out. Morenillo is introduced at the very beginning of the film as a gentle giant figure similar to Lenny from Steinbeck's Of Mice and Men and his awkwardness and embarrassment in the face of his master's predatory carnal activities show him as a softer soul than is suggested by his willingness to shoot and fight. Moreover, his unstinting loyalty to John in the face of insult and abuse marks him as one of the few honourable characters on show. All this is conveyed by Onorato skillfully and he brings a genuine human element to a largely inhuman scenario. Ex Bond girl Martine Beswick also performs well, instilling her portrayal of Dona Antonia, the unfaithful wife of John's brother Francisco, with a a believable mixture of icy distance and repressed passion while Claudio Camaso plays the sadistic and power hungry brother with all the neccesary creepiness. His unapologetic nastiness appears as appropriate here in contrast to that of his protagonist brother. Finally, Gordon Mitchell's black clad, pistol toting, avenging angel is worth the admission price alone although it would have been nice to see more of him than the two short scenes we are given.

So all is not lost, but, in general, this is a film marked by missed opportunities rather than a successful adaptation of a classic tale. Perhaps Crispino's inexperience as a director was the cause. This was his first outing in the directorial chair. Perhaps it was mistakes made during the script writing process. Certainly the character of John is ill considered and doesn't allow for anything like the level of audience engagement that is neccesary for the piece to work. But whatever the cause, it is a good example of how, even in a genre where moral ambiguity and mercenary actions are not merely acceptable but warmly enjoyed, it is possible to go too far. And that even for the fan who likes their westerns on the dark side with down beat endings and seemingly amoral characters there is a need for some level of emotional connection with the protagonist. Sadly, John il Bastardo doesn't offer us this and as a result we not only lose sympathy for the lead character we are ushered into the worst possible scenario for an audience. We simply stop caring.

Overall the film is worth seeing as an interest piece but my advice would be, if you want to see a good telling of the Don Juan myth, give this one a miss and see Tirso's play instead. The original in this instance is definitely the best. (Version viewed was a fullscreen DVD-R ripped from a VHS with english audio and greek subtitles. Picture quality not great but I'm afraid the film's failings cannot be blamed on this.) --Phil H 14:19, 24 December 2008 (UTC)