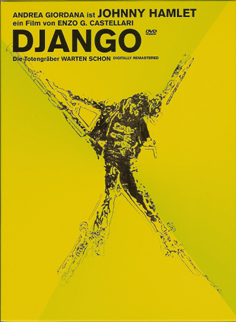 Originally a project devised by Sergio Corbucci, this retelling of Shakespeare's classic was handed to Castellari when Corbucci's time was blocked up with other commitments. Castellari grabbed the chance with both hands and aided by a script adapted by Tito Carpi and Francesco Scardamaglia set about turning the idea into a truly memorable mix of art and action.

Shakespeare's original story is adhered to reasonably closely with the young Hamlet (Johnny played by Andrea Giordana) returning home after a two year absence to discover his father dead and his mother newly married to his uncle. Understandably disturbed by this state of affairs and highly suspicious of his uncle's role in the death of his father, Johnny sets about getting to the bottom of the intrigue and seeking revenge. Character names are adapted from the original too, with Guild and Ros appearing as Uncle Claude's henchmen, Horaz as Johnny's old friend and Gertrude and Ophelia as mother and young squeeze respectively. The travelling acting troupe is also utilised and it is through them that quotes from the bard himself are used to introduce the piece while Johnny lies dreaming on a Gulf Coast beach, on his way back to the family ranch of El Senor.

This could easily sound trite and overly contrived but Castellari turns in one of his best directorial performances within the western genre and produces a genuinely striking film. There are a number of scenes which could be lifted straight from an art film of the period; combining creative and experimental visual stylings with inner monologues and drama. But this is always interweaved with the conventions expected from a western. Action, fist fights and shootouts are never far away and keep the whole thing moving along at a fair clip. In fact these elements are easy to fit into this classic tale as the story of Hamlet is full of intrigue, murder and duels (altough admittedly more swordplay than gunplay) and if anything the body count is lower in Castellari's version than in Shakespeare's.

Giordana's portrayal of the angst ridden hero is competant and effective but Horst Frank (his usual wicked self as Uncle Claude) upstages the central character more often than not; Combining his icy, blue eyed restraint with bouts of animated megalomania. Gilbert Roland is probably the weakest of the three male leads but does enough in his role of Johnny's old friend, Horaz to avoid embarrassment while Francoise Pevost brings just the right amount of melodramatic tension to the role of the misguided mother.

The music score from Francesco De Masi is also a winner and offers an effective mix of mood creating tones, rousing chords and classic sixties theme song (Find the Man) utilising the excellent voice of Maurizio Graf of Return of Ringo fame.

But it is Castellari's use of innovative camera angles and visual styling that really sticks with you here. The first graveyard scene, where Johnny returns to discover his father's death and hears his voice from beyond the grave is magificently shot at a disorientating angle with the use of a slowly turning wheel. There are a lot of directors with far loftier reputations who would be understandably proud if this piece of creative filmmaking were their own and it is lasting proof that genre cinema can often throw up the most surprising results despite (if not because of) the framework they work within. Johnny Hamlet is certainly a case in point here. It is first and foremost a western; an action film. But this doesn't stop it from pushing its boundaries and extending its range to include truly artistic elements which allow it to work on far more levels than might be expected. 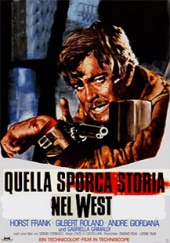 Another good example of that is the parallels clearly made between the figures of Johnny and his mother with those of Jesus and Mary. Catholic Christian imagery is a recurring element in many italian westerns; unsurprising given the theological background of its creators as well as its target domestic audience. But here the imagery is starkly unavoidable. Once his father's persecutors have been exposed Johnny is literally crucified and left to die. His mother, mortally wounded, makes her way to the site of his torture and lies prostrate beneath his cross, bleeding and seeking forgiveness for her sins. Johnny then defies death and returns to clear the ranch of the evil that has overtaken it, eradicating the perpetrators of wickedness and causing the source of avarice (gold dust) to be swept away in a cleansing breeze.

Heady stuff. And all done with a solid shoot out at the end too. Excellent!

On the surface, if suggested to a neutral, I suspect the idea of a Shakespeare tragedy retold as a western by italians would not instill great confidence in a satisfying outcome. But anyone lucky enough to get hold of a copy of Johnny Hamlet (Koch Media have released an excellent copy on DVD available from amazon in germany) will be able to testify that it can actually be the recipe for some first class cinema. This really is a little known gem and deserves far wider recognition. See it if you can.

Footnote: If you decide to invest in a copy of this film be warned that the usual title jumble will face you when searching for it. Although known as Johnny Hamlet in the english speaking world this film was originally released in Italy as Quella Sporca Storia nel West. The Koch Media DVD released in germany goes under the title of Django, die Totengräber warten schon. Go figure.

Retrieved from "https://www.spaghetti-western.net/index.php?title=Johnny_Hamlet_review&oldid=40246"
Category:
Cookies help us deliver our services. By using our services, you agree to our use of cookies.