Johnny Oro was made immediately before the groundbreaking Django, but released afterwards. It’s said that Sergio Corbucci abandoned the project before it was completed, leaving it to others to finish it (*1). The film tells the story of a bounty hunter, Johnny Jefferson Gonzales, who kills three Perez brothers after the wedding of the oldest brother. The fourth and youngest brother, Juanito, is spared because he has no price on his head. Juanito assembles a gang of Mexican outlaws and renegade Indians and swears revenge. When Johnny is thrown in jail for the use of dynamite in a town where fire arms are not allowed, Juanito threatens to raid the town if Johnny isn’t handed over to him ...

Some details, like the unusual alliance of Mexicans and Indians are a step towards the approach that would establish Corbucci’s name as one of the genre’s most original directors, but this is still a transitional movie. Johnny’s black clothes were modeled after Richard’s Boone’s Paladin from the TV series Have Gun Will Travel, of which Corbucci was a fan (*2) and the script takes some inspiration from Howard Hawks’ Rio Bravo: The sheriff is still a person worthy of respect and there’s a typical Hawksian character of an old drunkard, who feels at home in prison, and immediately breaks a few windows when he's released (so the sheriff is forced to lock him up again). When Juanito is about to raid the town, the sheriff and his family, plus this old timer are the only ones who stay behind to defend the town and the prisoner ... 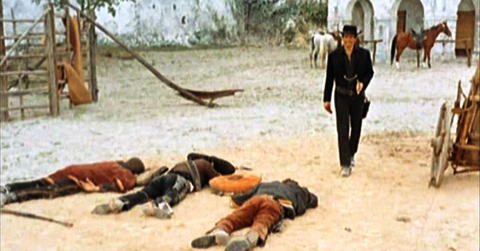 The Italian theme song tells us that Johnny is not interested in women, for his only love is gold (*3). His gun, his spurs and his cigarette holder are all made of gold. Johnny Oro, the character, anticipates the well-dressed anti-heroes in Corbucci's later movies, but unlike the Polish mercenary Sergei Kowalski (The Mercenary) or the Swedish gun-runner Yodlaf Petersen (Compañeros), who both develop a social conscience in the course of the movie, Johnny Oro does not evolve. He’s an almost cartoonish character, who’s only cause is, and will ever be his love for gold. We're told that he was born in a goldmine. This puts him in line with Asterix' friend Obelix, who owes his superhuman strength to the fact that he fell into a cauldron with a magic potion when he was a small boy.

The first twenty minutes, with the shoot-out outside the church and the killing (by Juanito) of the bride, priest and altar man of the shotgun wedding, are very good, but afterwards the movie loses focus. Johnny spends more than twenty minutes in jail and not very much happens until the explosive - and rather chaotic - finale, with Johnny (literally) blowing up the villains (and half of the town). There are a few inspired moments, such as a wonderful scene with three mariachi players, who are hiding their guns in their instruments. On the plus side there's also a nice - if somewhat typical - score by Carlo Savini, plus a wonderful costume and production design by Carlo Simi. The Indians in the movie are Apache. They were chosen because the Apache are Indians without feathers and their traditional outfit wasn’t to difficult to suggest with a few lengths of cloth. Gianfriglia, who plays the Indian leader, spoke with a strong Roman accent and the effect was hilarious, the people on the set doubled up with laughter, therefore most of his lines where skipped.

Johnny Oro is not a great movie, but it’s interesting within the context of Corbucci’s career. Several story elements would pop up in later movies: the gun-free town in The Specialists, the besieged town (and the double-crossing citizen) in Navajo Joe, and the killing of defenseless people in many of his films.

Retrieved from "https://www.spaghetti-western.net/index.php?title=Johnny_Oro_Review&oldid=111651"
Categories:
Cookies help us deliver our services. By using our services, you agree to our use of cookies.