Johnny Yuma has all the ingredients of a Spaghetti Western which could go either way. What I mean is, it has some solid components and some which are not so dependable and, without seeing it you could be forgiven for expecting something of a dud. Happily, it's strengths far outweigh its weaknesses and Johnny Yuma winds up being a thoroughly enjoyable genre piece that serves up some truly memorable offerings. 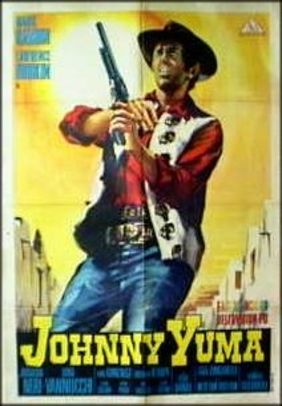 Money hungry Samantha Felton connives with her brother Pedro to murder her husband in order to get her hands on his ranching empire only to discover that he has left everything to his nephew, Johnny. She decides to hire her ex lover, and ruthless bounty killer, Carradine to get rid of the unwanted heir. Meanwhile, Johnny arrives in town, discovers the plan against him, forms a mutual respect for Carradine and sets out to find the hidden will which would scupper Mrs Felton's evil plans.

Mark Damon plays the eponomous lead and despite his unsettling resemblance to Englebert Humperdinck he carries the role pretty well. Damon is probably no one's favourite spaghetti star. Not that he is particularly bad in anything; he just doesn't impress greatly in anything. But he does enough here and offers a reasonable contrast to the other male leads around him.

Foremost amongst these is Lawrence Dobkin, an american actor better known for his work on radio prior to this film and who went on to be a regular face on various TV shows in the states. Dobkin, again, is not an obvious choice for the chess playing killer Carradine, yet he fills the role with genuine dignity and adds a level of integrity to the piece. Cold and ruthless in his job while simultaneously carrying a tortured broken heart from his previous experience with the cruel but beautiful Samantha, Carradine is a multi layered character and Dobkin plays him with just the right amount of distance. The fact that he reminded me of a Gerry Anderson puppet in appearance at times was only slightly off putting and in a way strangely comforting.

But the real star of this film is undoubtedly Rosalba Neri. In this, her first western outing, Miss Neri exhibits all the sultry deviousness she would make a career of in ensuing films and steals the spotlight from everyone else in the picture. Her character, Samantha Felton, exudes equal measures of evil and voluptuous sexuality to the point where no male in her vicinity is immune from her powers of seduction. She proves to be Carradine's achiles heal but Johnny is also tempted and there is implicit evidence that she holds some incestuous grip on her brother Pedro also. An early scene where he traces his fingers across her exposed cleavage tells us all we need to know here. For heaven's sake, even her pet parrot gets overheated watching her undress for her bath!

Neri is the centre point of this film; driving the plot at every turn with her scheming and affecting most of the lead characters' motivations throughout. She also adds a gothic flavour to the piece. Austere beauty surrounded by candelabra and flintlock pistols, there is an element of Edgar Allan Poe to her scenes despite the western setting of the story.

But this is a western and there is enough action and gunplay to keep any fan of the genre happy. In fact sometimes there is almost too much. The body count in this film is almost outrageous. The final shootout with Pedro for example includes the death of no less than 24 henchmen! Luckily, it is played out so well that it manages to maintain our interest and deliver all the elements a showdown should.

Director Guerrieri must take credit for this. Although on occasion he flirts with semi comedic elements which threaten to lose touch with the films dark core he manages to keep Johnny Yuma firmly on track while offering an impressive mix of visual framing and dramatic tension. the latter of which is crucial for the film to work as a whole. The developing relationship between Yuma and Carradine is particularly well handled; each man acting as foil and counterpoint to each other.

The film also benefits from an excellent score by Nora Orlandi; one of the few female composers who worked in the genre. In fact, the theme song, although a trifle on the cheesy side to say the least, is one of the most memorable ever. A song which, once heard, will stay in your head for days after. But the theme song, though dominant, is only one element of the score. Skillfully using the operatic technique of themes for each character, the overall musical influence on the film is significant and one of the films real triumphs.

It would be wrong to pretend that Johnny Yuma is an important spaghetti western. Its significance does not rank alongside the films of Leone or Sollima or Corbucci. It wasn't an influential film. Nor is it ever likely to be. Indeed it is unlikely to be found in any fan's top twenty list (apart from maybe mine). But it is an excellent example of how a good genre film can be made from unexceptional ingredients. True, Rosalba Neri went on to prove herself a genre stalwart and the other personel were all solid professionals. But these ingredients could just as easily have gone to waste and Johnny Yuma would have become just another, slightly rubbish picture. Thankfully that is not the case. It turned out to be some of the best work any of them were ever involved in and, as a result, is a film I highly recommend.

Retrieved from "https://www.spaghetti-western.net/index.php?title=Johnny_Yuma_review&oldid=108923"
Category:
Cookies help us deliver our services. By using our services, you agree to our use of cookies.