Jonathan of the Bears Review 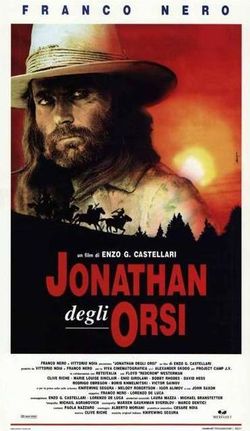 As a child Jonathan witnessed the murder of his parents by bandits; as an adult he discovers the futility of his rage and gives up his desire for revenge, but he’ll have to take up his arms again when the Indians who raised him, are threatened by a businessman who’s after the 'black gold’ under their burial grounds. This late descendent of the spaghetti western genre is a mix of styles and influences.

JONATHAN OF THE BEARS

Jonathan of the Bears (Jonathan degli Orsi, see Database Page is an Italian-Russian co-production from the nineties, when the western genre had a brief upswing thanks to Ocar winners like Dances with Wolves and Unforgiven. It was filmed in Russia with an international cast. The western town was built within the confines of a military base (artillery) near Moscow (1). The film was co-produced by Franco Nero (who had also co-written the original story) and financed by Silvio Berlusconi, before he went into politics. This late descendent of the genre is a mix of styles and influences. Castellari was only brought in very late but still managed to put his imprint on the production. 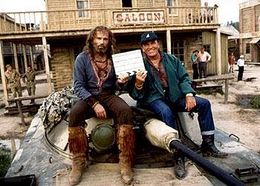 The Jonathan from the title is a young boy of Polish descent, Jonathan Kowalski, who befriends a young bear and is adopted by a friendly Indian tribe after he has witnessed how his parents were killed by bandits. As an adult, having become a legendary warrior (his exploits are immortalized by a minstrel!), looking for his parents’ murderers, he becomes aware of the futility of his inner rage. He returns to the people who raised him, determined to lead a peaceful life, but he’s forced to take up arms again when a money-hungry speculator has discovered oil under the the tribe’s burial grounds and will stop at nothing to get to the ‘black gold’.

Jonathan of the Bears is often called the Italian answer to Dances with Wolves (1990), but according to Nero he already had plans (but wasn’t able to finance the project) for an ‘ecological’ western featuring Native Americans before Costner's movie became a hype (2). The story of the orphan who’s adopted by Indians owes as much to Little Big Man, but if the story was not inspired by Costner’s movie, the title most certainly was. The original title was Nikita Jones, and it was the co-author of the original story, Lorenzo De Luca, who came up with the actual title and the idea of the little bear (3). The first half of the movie tells a story about the spiritual quest of a man raised by Indians, the second half is a more straightforward action tale. The first half is told in flashback style, moving back and forth between Jonathan’s childhood and maturity (Nero literally walking through is own past); in the second half the flashback style and some of the film’s motives are dropped in favour of a lot of slomo violence and truly awful horse-tripping. The different parts are linked to each other by a quasi-mystical conversations between Nero and his foster father, the Chief of the tribe, about "mother earth" and the greedy white man destroying the red man’s way of life.

Nero looks remarkably fit for a man in his fifties and Hess and Saxon are good villains. Casting Native American actors in the lead roles (Floyd “Red Crow” Westerman had been in Dances with Wolves as well) was a good idea, but the casting of Mongolian extras as warriors works distracting. Jonathan of the Bears is not a bad movie but it fails to create the magic of Keoma and we’re also supposed to believe that this money-hungry speculator (Saxon) was the last man present at the murder of Jonathan’s parents: he’s identified - in a trick borrowed from Death Rides a Horse - by a medaillon he stole from Mrs. Kowalski; what perfectly worked as a dramatic device in Petroni’s movie (because both characters had become friends) feels empty and needlessly contrived here.

Retrieved from "https://www.spaghetti-western.net/index.php?title=Jonathan_of_the_Bears_Review&oldid=94655"
Categories:
Cookies help us deliver our services. By using our services, you agree to our use of cookies.