Kid Terror of the West Review (by J.D.)

Review of Kid, Terror of the West (1969) aka Kid il monello del west 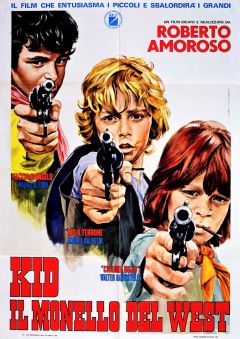 Okay, now, this one is a anomaly in the genre... a kid's movie. When I heard about this one, I was somehow under the impression that it was about some strange town that was overrun by kids and there were no adults at all, like some sort of strange Twilight Zone episode. Expecting the worst, about 5 minutes into it, I suddenly realized that it was a kid's movie, so I figured, what the hell, I'd watch it anyways. I don't have kids, and probably haven't seen a kid's movie in over 25 years, but I have to confess... I actually enjoyed this movie, directed by Tonino Ricci.

The film starts off with some kids pretending in a saloon in a ghost town. It's a bit odd, as the little girls are dressed like saloon whores. The kids play poker, chomp on cigars and drink milk out of whiskey bottles. Some real outlaws ride into town hoping to hide out in the ghost town while they rob a bank in the nearby town. The kids all gang up on them and end up pummeling the crap out of them, but not before serving them warm glassses of piss (saying it was "warm beer"). 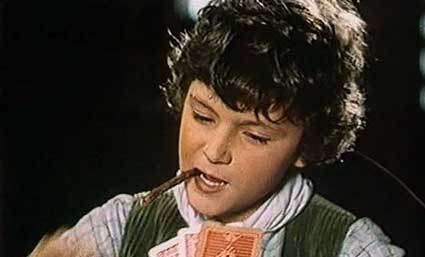 As it turns out, the outlaws are waiting for their leader to get out of jail, who just happens to be a midget.... 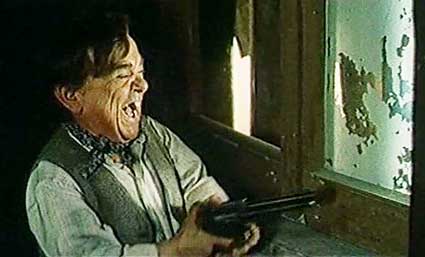 There's also a subplot of a local landowner who's about to get his land taken by the evil banker.

The kids go back to town and decide to rob the bank themselves, by hiding one of them (a kid with a weak bladder who provided the aforementioned "warm beer") in a big suitcase. They successfully manage to steal the gold. The gang gets wind of the bank robbery, thinking their midget boss double crossed them (as he could have easily fit in the suitcase). The kids stashed the gold from the bank in the old saloon where the bandits are hanging out. They end up framing the bandits, and the kids get the reward money, which they give to the landowner so he can pay off his debt and keep his land.

Now, I'm not much of a kid person, which is why I was surprised I liked this movie. The acting from the kids was surprisingly good, much better than a lot of the adult acting you see in many spaghettis. The leader of the kids, Kid O'Hara, the Terror of the West (Andrea Balestri), plays quite a grown-up role for a kid who's probably only ten years old, and some of the kid dialogue in the film is quite mature. I suspect a reason I liked it because it was so crude... in addition to the piss/beer gag, there's a fat kid who farts a lot, the piss kid pisses all over an outlaw in a bar brawl, and the kids actually shove some horseshit into another outlaw's mouth in the same brawl. And there was this cool little girl who knew some serious karate moves and kicked some ass: 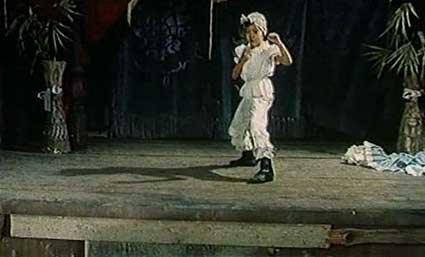 I'm convinced that there were no stuntwomen in Italy back in the day. This is the second spag I've seen where there's a gal brawling who is most certainly a dude. And they overdubbed female vocals on him, too: 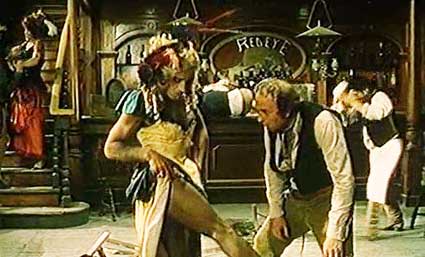 Now, this certainly isn't something a typical spaghetti fan would probably want to see or seek out. But if you have kids and don't mind some toilet humor and a few bar brawls (nobody gets killed in the movie and there is no blood), it's worth sitting down and watching this with them and hopefully starting them off on a lifelong love of spaghetti westerns.

Retrieved from "https://www.spaghetti-western.net/index.php?title=Kid_Terror_of_the_West_Review_(by_J.D.)&oldid=132594"
Category:
Cookies help us deliver our services. By using our services, you agree to our use of cookies.