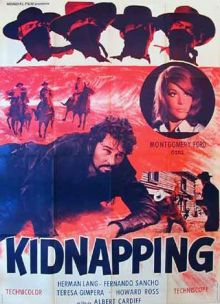 Described by Kevin Grant as “one of the key redemption westerns” of Italian genre cinema, Kidnapping is a film which features many of its director’s familiar tropes and stylistics and is anything but fast paced but I like it all the better for that. I would also argue that it possibly features Brett Halsey’s finest performance in a western.

Former sheriff, Fred Leinster (Brett Halsey) has descended into drunkenness after the death of his wife and son in a buggy accident. Easy prey for someone wishing to take advantage of his weakness he finds himself lured into acting as a middleman for bandits who have kidnapped a local woman's son and demanded $20,000 for his return. Leinster collects the cash but he and the gang member sent to direct him (Antonio Casas) are ambushed and the money taken by a mystery assailant. With the bandit dead and the money gone Leinster is left with all sides blaming him for their losses. Realising he needs to fix things fast he sobers up and sets out to return the boy, retrieve the money and clear his name.

This is a simple enough plot, but it's played out at a slow and steady pace. Low on action but high on intrigue, it allows us to connect properly with the characters and enjoy the gradually increasing tension of the story. The occasional red herring is placed to keep us guessing and the flawed hero is allowed a series of mistakes with an arc to his character which makes him much more believable. In fact, if anything, Leinster is almost too fallible for a hero figure. For large parts of the film, he tries and fails at every turn, being thwarted and captured repeatedly in a way that presents him as somewhat useless until he finally wins out over the various forces working against him. But again, for my mind, this actually adds to his believability and kept me rooting for him throughout. Less believable perhaps is the speed with which he overcomes his alcoholism and regains his dead shot skills. But hey, I’m willing to cut some slack in this area as the film works well enough in other areas and Halsey’s performance is strong overall, making Leinster a sympathetic and genuine character.

The cast in general is strong here if somewhat underused except for Halsey who dominates the film. Fernando Sancho is decidedly reserved by his standards and Antonio Casas and Paco Sanz are quality actors who definitely could have benefited from some more screen time. Germano Longo does what is required in the sheriff role while Teresa Gimpera as Jane, the kidnapped boy's mother plays her part with a suitable degree of dramatic gravitas and looks great into the bargain. Even the young boy is not nearly as irritating as many are in such parts. But it is Halsey who shines brightest and the flaws in the character allow him to really flex his acting muscles; expressing a range of emotions through expressions and physicality alone. He exudes a sadness and vulnerability that I think is really quite compelling and unusual for a spaghetti western lead.

When I interviewed Halsey back in 2009 he shared how much he admired Alberto Cardone as a director and, in particular, his creativity in overcoming budgetary limitations. The previous film the pair made together, Wrath of God, illustrates this talent especially but Kidnapping is another fine example. From red smoke in the forest adding an almost gothic eeriness to tight framing which hides the obvious sandpit locations, Cardone always managed to bring the most from what he was given and deliver more than most would with the same resources. His bombastic zooms and close ups are an acquired taste perhaps but combined with Michele Lacerenza’s musical punctuations they give that heightened Italian sense of drama I always enjoy.

Michele Lacerenza provides a solid if occasionally uninspired score; some of which, predictably, features his own, beautiful trumpet playing. A sound easily recognised by anyone familiar with the ground-breaking scores by Ennio Morricone on Sergio Leone's Dollar films. Lacerenza supplied four music scores of his own for Spaghetti Westerns including this one and they were all for Cardone. All of which were decent but none of which threatened the work of the true maestri in the genre. In Kidnapping, his music alternates between twanging guitar, the sombre tones of cello and piano to the occasionally less fitting sound of electric organ. Organ aside it mostly works well and fits the editing and Cardone’s visual style without ever becoming particularly memorable.

I like Cardone's westerns. In fact, only $20,000 on Number 7 has disappointed and when his budgets are considered his consistency of quality is laudable. Invariably he manages to add stylish elements to straightforward plots and allows interesting characters to develop while still delivering sufficient and well constructed action scenes. He will never threaten to usurp the reputations of some of the genre's bigger hitting directors but his work was pretty darn good for all that and I for one would rate him in the upper echelons of the less well known or celebrated Spaghetti auteurs. Kidnapping is a fine example of why I like him as much as I do.

The version of the film I saw was an excellent fan dub with a beautifully clean widescreen picture and English subtitles. Thanks go out to the fellow fan who made this possible.

THIS IS AN UPDATED REVIEW BASED ON A PREVIOUS ONE WRITTEN FOR MY BLOG IN 2011. THE ORIGINAL REVIEW CAN BE FOUND HERE

Retrieved from "https://www.spaghetti-western.net/index.php?title=Kidnapping_Review&oldid=125063"
Category:
Cookies help us deliver our services. By using our services, you agree to our use of cookies.