The penultimate of Sergio Garrone’s spaghetti westerns, according to some his worst. Apparently Garrone himself has no recollections of it at all (*1). The film tells the story of a corrupt banker, Burton (Aldo Sambrell) who wants to lay his hands on all the gold mines in the area. A bandit named Martinez - who lives in a grotto (!) - is blackmailed into attacking those miners who refuse to sell their claims. Of course there’s a new gold digger in town - or rather the area - who comes to the aid of the poor miners, a guy called Johnny. He is framed for a crime he did not commit but sprung out of jail by a moustached bounty hunter - or whatever - who had already given him some assistance during a barroom brawl. The two ... etcetera etcetera.

A protracted pre-credit sequence tells us that this banker Burton had a past as a bandido known as Santana. After a bloody raid on a homestead, Santana double-crossed his own man and ran off with the loot. With the help of the money, he later must have become the banker and town boss Burton. At least that’s what we’re supposed to believe. This is the Italian West, where everybody speaks the same lingo, Italian, Spanish, English or even German, depending on what version you got hold of, so nothing is impossible.

This is a rather disjointed movie; could it be a patchwork movie, using material of various productions that were never finished? Scenes are cut short and the characters seem to be looking for the coherence the story lacks. There’s an old prospector (named Livingston, no less), a sexy saloon lady, a local doctor (who’s also the town drunk) and the doctor’s marriageable daughter (who has the hots for Johnny but is promised to the banker), but - needless to say - there’s no Django (*2). Giacomo Rossi-Stuart’s Johnny looks like the Italian answer to Elvis, greased quiff and all, while Mario Novelli’s bounty hunter must be on his way to San Francisco („be sure to put some feathers on your hat“): instead of six-shooter he uses a flute to stupefy opponents with poison darts. However, the most outlandish character is this machete-wielding Mexican bandit Martinez who lives in a cave, looks like a samurai and is played by Chinese actor George Wang - What the ... 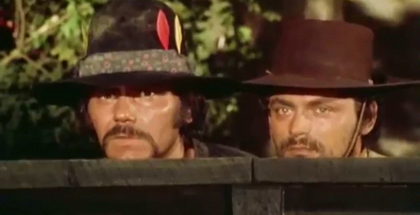 Simon Gelten is a long time contributor to the SWDb. "I'm not as old as Tom B. but I'm working on it. I hope to catch up with him by the end of the next decade.", he says. Simon saw all movies by Sergio Leone and several by Sergio Corbucci in cinema, most of the time in Eindhoven, the city where he was born. Currently, Simon is living in Turnhout, Belgium. Simon is active within the database as both Scherpschutter and his alter ego Tiratore Scelto.
Retrieved from "https://www.spaghetti-western.net/index.php?title=Kill_Django_..._Kill_First!_(Tequila)_Review&oldid=105401"
Category: