Kill Them All and Come Back Alone DVD review 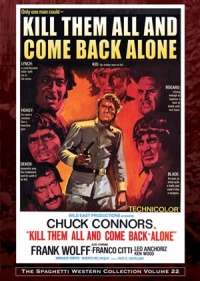 Possible spoilers ahead!!! Clyde Mac Kay (Connors) assembles a gang of experienced jobsters to pull a heist on a union army stronghold. The assignment comes from a Captain Lynch (Wolff) of the confederate army, supposedly working for the intelligence department. Mac Kay sets out with his gang of professionals, consisting of a cold blooded killer kid (Del'Acqua), a halfbreed (Wood), a dynamite expert, a slingshot guy and a strongman. On the way Lynch actually joins them. The heist on the stronghold is carefully planned and they pull out all the tricks to steal a bunch of gold stored in dynamite sticks. They liquidate almost the entire company. Mac Kay though also had another assignment: to kill all the others and come back with the gold alone. He escapes with a wagon and leaves the others behind instead. Bad luck for him, they catch up with him. But neither gets the gold. The soldiers stop them while trying to cross the river, so they dump the gold and enter captivity. It gets tricky when they find out Lynch is actually a northerner, and eager to get the gold. But the others are pissed at Mac Kay as well, and now it's every man for himself...

Comments:
Again, I am positively surprised. Castellari really knows his stuff and so you get a very professional action flick with no time wasted on things you don't need to see. There's all sorts of jumping, fighting, exploding and shooting, all very well staged and shot in an artistic fashion. The actors he assembled all do a good job, and they deliver a bunch of cool lines even. The story is interesting and takes a few interesting turns to keep you interested. I thought it even gained good suspense towards the end. There's a few glitches in the script, some logical mistakes, but aside from that the film really goes along well. What makes this film worth watching is definitely its entertainment value, and the fact that it doesn't come across as cheap assembly-line fare, Castellari really put some effort in it. A really decent movie.

Wild East presents this DVD with a nice menu and chapter stops. The pricing is average. It's good to see this one on DVD, although there is a German one out now that I will compare to this one in a few weeks.

Audio: As usual only English audio provided. The sound is acceptable. There is a bit of noise and the audio is not very stable, so you get lots of crackling on peaks. From the DVD's menu you can tell that there is better audio available at least for the music. All in all it is okay though, as even through the action scenes none of the flaws are apparent enough to disturb the overall experience too much.

Video: I'm starting to dislike the interlacing on Wild East's discs, I'm not sure if that's my player's fault but still. The picture on this one suffers from scratches, noise and the usual compression. The picture is not very sharp and the colors are - sometimes very - faded. Acceptable stuff, but even Wild East has done better.

Extras: The highlight here, aside from the US trailer and a picture gallery, is a 40 minute interview with Ken Wood, where he talks about his career and some experiences. This guy did certainly not have it easy. Especially sad for him that he almost got to play Reynolds' part in Navajo Joe. Not so sure why he has to share his lovestories on this interview, and I wasn't aware that Tomas Milian was supposedly gay, but he certainly likes to spill all these stories. But this 40min interview is really interesting and covers a lot of ground. By the way I hope Wild East is increasing the quality of their special features' video at some point. I don't think I'm doing anything wrong, the picture is really blurry on that featurette.

Wild East rolls out another one to fill the gaps. Kill Them All... is a very entertaining and well made film, that can be recommended without any buts. This one is one for the action crowd, with a story that entertains and enough dead bodies to fill a stadium. Too bad the DVD really offers only sub-par quality, but I guess you have to give Wild East credit for doing the best they can do with that sort of source material. I am curious about the German release which I already ordered. I will update this page with some information on how the quality compares to this one. All in all another WE release for the collectors and completists. They have included a very interesting interview on this disc, which alone might be worth the money ;-)

Retrieved from "https://www.spaghetti-western.net/index.php?title=Kill_Them_All_and_Come_Back_Alone_DVD_review&oldid=43705"
Categories:
Cookies help us deliver our services. By using our services, you agree to our use of cookies.