Kill Them All and Come Back Alone Review 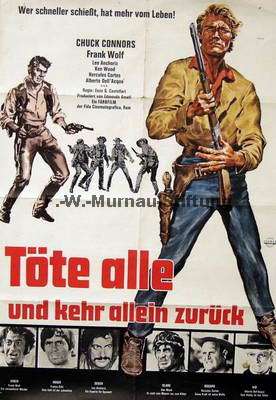 Enzo G. Castellari is, first and foremost, a great director of action sequences. In Kill Them All and Come Back Alone he showcases this skill non stop for the entire duration of the film. Don't expect any character development or complex drama here. It is fighting, shooting and explosions all the way with the deepest thing on show being Chuck Connors' tan.

Clyde (Chuck Connors) is hired by a Confederate General to carry out a raid on a Union stronghold and steal the million dollars worth of gold coins hidden there amongst an arsenal of dynamite. Clyde recruits a troop of five unsavoury characters to assist him in his quest and with the occasional help of Captain Lynch (Frank Wolff) the gang set about infiltrating the fort, grabbing the treasure and making their escape. All, of course, does not go strictly to plan and the situation is not helped by the untrustworthiness of all concerned. Nor indeed by the order given by Lynch to Clyde in regards to how he should reward his men after the robbery is completed. This order is where the title of the film is derived from as Clyde is instructed to "Kill them all and come back alone."

The premise of the film is clearly based on The Dirty Dozen, a very successful american war film from the previous year except, in true italian genre cinema tradition, the budget is smaller so we get a kind of 'Dirty Half Dozen' instead. The principle is the same though; with each villainous member of the gang expert in a different sort of violent conduct. Bogard the strongman, Blade the knife thrower, Deker, the dynamite expert, Hoagy the gunman and Kid, the baby faced killer.

The cast, apart from Connors and Wolff, is almost entirely made up of stuntmen and from the opening sequence onwards it is clear why. This is one of the most relentless action fests I have ever seen. No one is called on to act much past the odd grimace and an eventual death scene and there is not the slightest pretense that anything more subtle than a fistfight will be required of any of the protagonists. A dizzying number of punches are thrown, buildings blown up and extras slaughtered and everyone clearly has more fun than a fat bloke in a chocolate factory. This is pure, unashamed escapism from start to finish and Castellari is certainly the man for the job.

However, too much action and not enough else can leave the viewer feeling a little empty after a while and this film most definitely could do with a jot more substance. Even Castellari's previous outing, Any Gun Can Play, no Chekhov drama by any stretch of the imagination, had enough twists and turns to keep you interested and give cause for the action. Kill Them All and Come Back Alone doesn't even attempt that much and ultimately the film becomes forgetable as a result. This is a pity as Castellari proved himself capable of handling deeper storylines with genuine skill in films such as Johnny Hamlet and Keoma and his creative skills behind the camera, with framing and composition, were significant in my opinion. But in this film, apart from the occasionally interesting camera angle, it is only Enzo's skills at directing and choreographing action sequences that is on show. All of which he does very well of course, probably as well as anyone in the business, but I for one would have prefered to have more meat on those action bones.

That is not to say that the film isn't entertaining enough in it's way. It is pretty decent fun and I certainly enjoyed it for what it is. What it is, however, is chewing gum for the eyes. The same flavour from start to finish and no substance. Nothing wrong with that of course, I just found myself hungry for something more satisfying after it had finished.