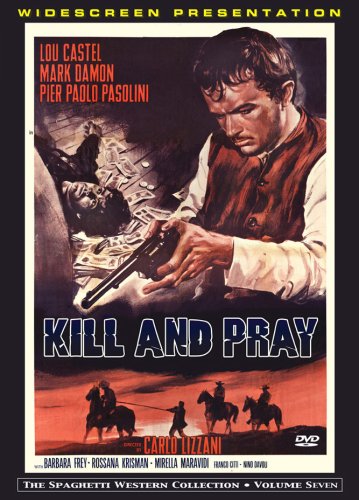 Only one boy survives a massacre committed upon a community of mexican peasants. Raised by a puritan family, grown up (Castel), he sets out to get back the man's daughter, who ran away to find another lifestyle. He finds her in a Texas down dominated by a man named Ferguson (Damon), who rules the town with an iron fist, working as a prostitute unable to get away. As it turns out, there are forces beyond his control that lead him to discover his heritage, and who the murderers are. Raised as a humble religious man, but skilled with the gun, he sets out to get the record straight. (114mins)

Lizzano does something very bizarre here. He starts of with a touch of politics (Mexican peasants, massacres, intrigue), then wanders off with a personal story of a man trying to find his love, and then returns to the revolutionary theme, with mentions of even more political topics, for example having Ferguson rant about planter aristocracy. All that sadism that accompanies the story, leads to a very harsh athmosphere actually, and the happy music and the fact that the good wins over the evil, can't change the fact that this is quite a sinister film actually. Overall I was positively surprised by this film, I think both Castel and Lizzano did a great job in telling a heartwarming story in a really great way. Recommended.

As one of Wild East's earlier DVD releases, Kill and Pray nevertheless aims high enough for the afficionado to hanker for it. Here's a quick assessment of what the disc has to offer.

The only audio option offered is the English dub, which is quite good in terms of content. Overall, the dynamic of the track is good, being a mono track. The big problem is that it sounds very hollow in most places and bears noticable crackling noises. All that within consideration of possibly poor source material, this is an acceptable effort, and it really does sound good enough.

The picture comes in 1.66:1 widescreen, I am not sure if that is the OAR. The picture has okay contrast, but lacks sharpness and the restoration on this image is not up to some of the other Wild East releases. The picture is full of grain and damage and there is a gray thing over the entire movie. But this is being picky, considering the poor source material these guys were most likely dealing with, it can be considered as so-so. But nevertheless, the picture is a tad disappointing, but to repeat myself: it's more than okay considering what we're dealing with here.

Next to a medium-interesting 15-minute interview with Lou Castel are 3 trailers and a few pictures. The interview also touches Matalo and a few of Castel's experiences with the films. The trailers are 2 for Quien Sabe and one for Matalo. There is no trailer for Kill and Pray unfortunately.

Wild East brings this quite good film on a disc, that could be better, but is still acceptable. There are considerable flaws in the image quality and the audio sounds a bit hollow in most parts. The DVD is lacking other languages. Aside from that, the presentation of this film is satisfactory and the film is good enough to justify the purchase.

Retrieved from "https://www.spaghetti-western.net/index.php?title=Kill_and_Pray_DVD_review&oldid=37931"
Categories:
Cookies help us deliver our services. By using our services, you agree to our use of cookies.