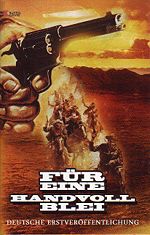 A violin playing drifter arrives in town and becomes embroiled in the affairs of a pair of feuding families. His killing of the favourite youngest son of the wicked Griffith clan and his budding romance with the eldest daughter of the beleagured Drumonts means that things get a whole lot hotter before they are settled in a showdown at the wedding meant to bring the families together.

Responsible for a handful of Spaghettis, Tanio Boccia can best be described as a journeyman director. Reasonably capable but rarely inspired and usually shackled to a low budget, his work is unlikely to excite anyone looking for a hidden treasure in the genre. Kill or Die certainly fits this profile. Despite its gritty title this is a strictly pedestrian stroll through a conglomerate of cliches interspersed with some reasonable, if not overly invigorating action sequences. The story is based on the 'feuding ranchers' model and has a strong romantic element which gives it something of a traditional U.S western feel. The crusty old man for 'comic' relief and a clean cut younger brother learning how to be a man add to this ambience and then we have the hero's life saved by a cute looking dog for good measure. This may all work in a saturday matinee oater starring Bob Steele or Crash Corrigan but Spaghetti with syrup is a sickly combination and just tends to leave the consumer with a stomach ache and a bad taste in the mouth.

It is clear that the producers were attempting to recreate the success of the Giuliano Gemma films here. The main character turning out to be called Ringo is a clue but that happens in a lot of films from this period that are giving no more than a nod in the direction Tessari's classics. The clearer evidence that we are witnessing near plagiarism is the hero's repeated use of a catch phrase; in this case, "Maybe later, maybe later." This is an unmistakable attempt to mimic the style which had made the original Ringo films such domestic money spinners. Unfortunately, Rod Dana, although not overly bad, is no Giuliano Gemma and Tanio Boccia is definitely no Duccio Tessari. Neither has the panache of the originals and what we are left with is a second rate copy which fails to deliver on all fronts.

This is not to say that Kill or Die is a terrible film. It's just a bit ordinary and falls between the categories of 'decent' and 'so bad it's good', making the final product just a bit forgettable. In fact, it turned out to be so forgettable that, on sitting down to write this review, I realised I remembered practically nothing about it despite having viewed it only a short time ago. I had to watch the whole thing over again (not something I'd recommend to anyone else) in order to be able to write something accurate.

In looking for positives I could say that it is always good to see Andrea Bosic; in this case unusually cast as the honest sheriff. Gordon Mitchell also shows up in a short lived cameo as a black clad hired gun with just enough screen time to fit in a fist fight, a maniacal laugh and a bullet riddled death. Elina De Witt looks OK, if a bit insipid. And Rod Dana, although not up to the grade of the guy he's clearly trying to stand in for, does a reasonable job within the constarints made by the poor script.

On the down side, Rustichelli's score is weak, and badly used, Boccia's direction is no more than adequate and Alberto Farnese (as bad brother Chester) comes off like a pissed off lounge singer more than a mean cow punching killer. All in all, the best that can be said is that Kill or Die is a great title that is not lived up to by the film in general.

But what the heck, not every spaghetti western can be a classic and this one held just enough interest to keep me awake for an hour and a half without thinking about what might be for dinner or wondering what was happening on Gardener's World. And X Rated are to be applauded for putting out a nice quality DVD with english audio on a very clean widescreen print. It's just not a film I could highly recommend to anyone. Let's call it one for the completists among us.

Retrieved from "https://www.spaghetti-western.net/index.php?title=Kill_or_Die_Review&oldid=32587"
Category:
Cookies help us deliver our services. By using our services, you agree to our use of cookies.