Kill or be killed & Kill the Wicked DVD review 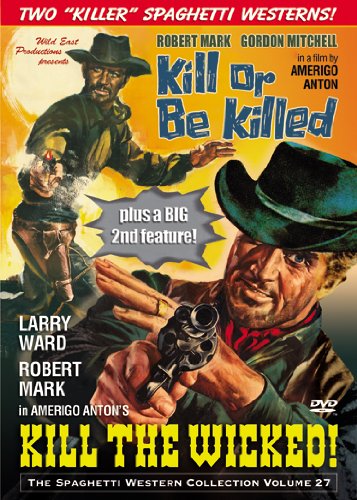 Kill or be killed

Mark is an unarmed, violin playing stranger who drifts into a town and defends pretty Lisa Drummond and her family headed by its patriarch and his psychopathic sons. When he finally reveals his skill with a gun, his real identity of gunslinger Johnny Ringo is exposed and the shooting really starts. For a detailed review have a look at the Film Review.

Opinion: This one is the first of four westerns by Tanio Boccia and a pretty mediocre affair. The actors are well picked and the sets are well done but the directing is a little bit static in my opinion. As with many other Spaghetti-Westerns the score is better than the movie.

Mark is one of the bad guys who holds up a stage, is wounded and left for dead while his partners and girlfriend hide out in a ghost town until a drifter and the woman he has found stranded in the desert appear only to face beating and torment from the bandits. When the stranger gets his hands on a gun and the recovered Mark shows up, the three-way fight for the money explodes. For a detailed review look here: Review

Opinion: Tanio Boccia's best movie and kind of weird. Anyway, it still is arranged quite lenghtily and doesn't offer anything too special except for the violent parts of the movie.

Wild East delivers decent widescreen prints of these two films (on one disc). The picture of both movies is sharp, vivid and almost without any scratches. So overall, the picture is quite good. The only audio options are the English dubs, which are decent, sound quite dynamic and are generally of good quality. Wild East as usual, packed nice picture galleries on the disc. Italian and English trailers are available for 'Kill the Wicked' only. At this point, some sort of featurette about Robert Mark (he plays in both movies) would have been nice, though.

Wild East provides the afficionado with yet another decent release of Spaghetti Westerns. The DVD is a nice presentation that scores in the audio and video department. The films are B-grade material with some good performances. Overall, the spaghetti western completists can't do anything but get this disc, yet another thumbs up effort by Wild East.

Retrieved from "https://www.spaghetti-western.net/index.php?title=Kill_or_be_killed_%26_Kill_the_Wicked_DVD_review&oldid=65530"
Categories:
Cookies help us deliver our services. By using our services, you agree to our use of cookies.