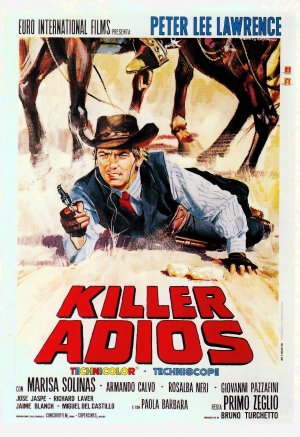 Killer Adios was the fourth and final western directed by Primo Zeglio, a man who, reportedly, didn't like westerns (1). In an interview he stated that some aspects of his movie had been inspired by one of the few westerns he actually liked, John Ford's The Man Who shot Liberty Valance (1961). There are indeed a few similarities. Liberty Valance is, to some extent, a mystery movie, and in one key scene someone is shot in the back. Both films are also about the coming of law and order in a western town, but Peter Lee's Jessy is not a bookworm, and the script is not concerned with the opposition between myth and reality, or violence and written law. Jessy is quickly appointed deputy, and when the sympathetic but otherwise impotent sheriff is shot, he takes over the man's job and restores order with the help of his six-shooter.

And the killer kiss

Retrieved from "https://www.spaghetti-western.net/index.php?title=Killer_Adios_Review&oldid=113224"
Category:
Cookies help us deliver our services. By using our services, you agree to our use of cookies.