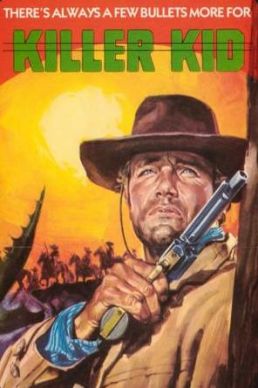 Set in Mexico, during one of its several insurrections, this is definitely supposed to be a Zapata western. To pin down all possible doubts, it opens with the following statement: “This film is dedicated to the Mexican people who in humble valor allowed for the birth of a modern, independent, democratic republic”. As we shall see, the statement is not a frivolous luxury, but a necessity.

American gunrunners are stealing weapons from the US army to sell them to a Mexican revolutionary group led by an old and wise man called El Santo. One of the transfers ends in a bloody shootout between the Mexicans and the gunrunners; all Mexicans are killed, except for their leader, El Santo's lieutenant Vilar, and a young boy, who is left for dead on the spot. The incident is witnessed by a famous gunslinger known by the name of Killer Kid. He brings the wounded boy to a Mexican town across the border, where he's welcomed by El Santo and his men, but is also confronted with Vilar, the very person who was responsible for the fact that things went out of hand. The Kid and Vilar take an immediate disliking to each other ... 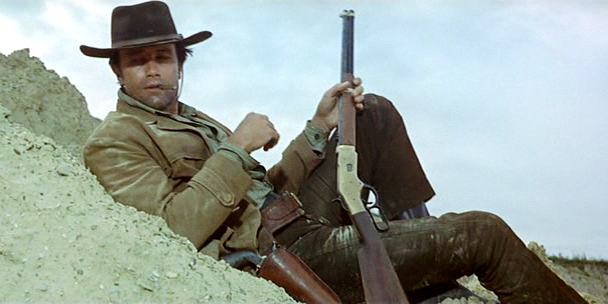 Unlike most Zapata westerns, Killer Kid was shot entirely on Italian soil, without any location work done in Almeria. Director Savona makes the best of the sandpits and also uses the Mexican town of the Elios studios to good effect, but it all feels rather artificial. Killer Kid, the character, is played by Anthony Steffen, an actor who could be quite effective as the gruff, taciturn stranger in town, modeled after Clint's No Name from the Dollar movies. However, the antihero from the Zapata movies, is decidedly a different type: he usually is an American or European professional, sophisticated but greedy, who joins the revolutionaries for opportunist reasons but eventually starts sympathizing with their cause. Steffen plays the duplicitous gringo in his own brooding way, and his conversion to the revolutionary ideas is not depicted in term of a political awakening. El Santo asks the American to stay with the peones, who 'deserve a better life' and that's it. As a result, Killer Kid doesn't really feel like a Zapata western, more like a misplaced Dollar movie, with the Kid joining a gang of criminals, giving them some assistance, but thwarting their plans at the same time. A No Name in Zapata land. 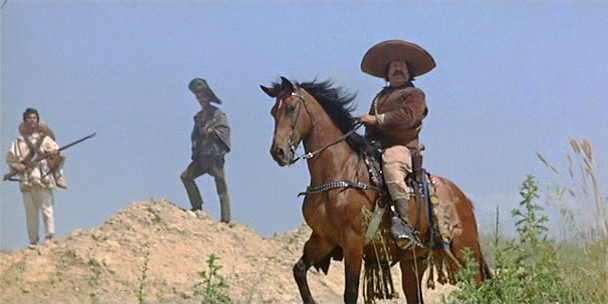 The first half of the movie is helped by a strong performance by Cianfriglia (usually only a supporting actor) as a merciless federal officer. Steffen's rock steady gringo makes a good contrast with Sancho's ebullient Vilar, an ambitious simpleton who dreams of becoming a great leader but discovers that he lacks all leadership qualities. Some tension is created in relation to Steffen's duplicity, but the cards are put on the table too soon: once we know what his motivations for joining the revolutionaries are, the film falls flat. The loyalty conflict is underdeveloped and his romance with El Santo's niece is ineffective because there's no chemistry between them. Most action scenes are decent, but the grand finale, a protracted shootout in a quarry, including a machine gun and a lot of dynamite, looks chaotic and even a little ridiculous, with lots of dummies (even Fernando) flying around after the explosions.

I'm not sure what to think of this movie, but I lean towards the negative. To me it simply doesn't ring true. When Mercedes told the Kid that he had become important to her and to the revolution, I said to myself: Oh yes, true, we're in Mexico and there's a revolution going on. I'm not even sure what to think of Sancho's performance; I usually like Fernando, but in this case his character might have benefitted from a more restrained, less effusive performance, after all Vilar is a tragic character. But others have been far more positive about Killer Kid. Our own Phil H and Edocle of the French spaghetti western forum (1) both think genuine attempts were made to allow the characters more depth and layers than many of the action oriented westerns from the period. According to Kevin Grant it's a more honest, less trendy and sprightly work than most other Zapata westerns made around this time. In a very interesting comment, he calls it a liberal-humanist work that doesn't subscribe the snarling socialist ideas that were en vogue at the time, but treats the revolutionaries' plight more as a matter of simple social justice (2). We can't all love the same movies.

Retrieved from "https://www.spaghetti-western.net/index.php?title=Killer_Kid_Review_(Scherpschutter)&oldid=131235"
Categories:
Cookies help us deliver our services. By using our services, you agree to our use of cookies.