Kitosch, the Man who came from the North 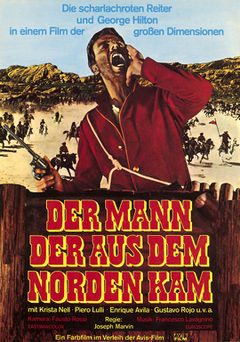 Kitosch, the Man who came from the North

For at least two reasons, this is a remarkable spaghetti western: it features Indians and it’s set in Canada. In the opening scene the title character, Kitosch, exchanges kisses with an Indian beauty. Persecuted by her father (who is not pleased) Kitosch takes refuge in an outpost of the Royal Canadian Mounted Police. The sequence is very similar to the opening of Last of the Badmen, in which George Hilton also plays a character called Kitosch (*1). In both movies the philandering Kitosch is expelled from a community for his bad behaviour, but eventually redeems himself by saving the very people who had rejected him.

The script of Kitosch, the man who came from the North is pretty sinuous, occasionally downright confusing. Kitosch is kicked out of the fort because the Mounties don’t like his philandering and yet, shortly after, he is mistaken – by several people who met him in the fort - for a scout who is supposed to escort a transport of gold through dangerous territory. When the real scout (played by Piero Lulli) pops up, he keeps his true identity a secret and doesn’t expose Kitosch as an imposter. The circumstances around the gold transport are quite bizarre as well. With the help of a few coffins (in which the gold is hidden) and women disguised as mourning widows, the Mounties try to deceive “The Renegade” (called McCoy in some versions), a mysterious bandit who is terrorizing and scavenging the surroundings with his army of cutthroats. In one scene there are two gangs, who are put up against each other by Kitosch with an easy trick. It all looks quite chaotic, as if a lot of it was invented on the spot.

With the action set in and around a fort, and a marauding gang of Indians and whites, the movie seems tributary to the Karl May movies. When Kitosch and the members arrive at the fort, all people inside are dead, murdered by The Renegade and his men, who are expected to attack the fort once again, to get their hands on the gold. The second half is therefore structured as a siege movie, with Hilton organizing the defense of the fort. Even Hilton’s character is, in some aspects, reminiscent of Old Shatterhand, but unlike May’s noble trapper, he’s a rascal and a philanderer, albeit one with a heart of gold. He also grows a stubbly beard and starts looking untidy while the siege of the fort continues. Lex Barker always seemed to find the time to take a bath and have a shave. There are a few large-scale battle scenes with lots of extras, but unfortunately they look poorly organized. Even the arrival of a Scottish regiment (kilts in a spaghetti western!) doesn't really help. Some tension is created about the true identity of this Renegade, and I must admit that I suspected the wrong man.

Related Review: Last of the Badmen Review – See note 2 for some info on the name Kitosch.

How to watch this movie – I watched a copy of a TV-showing with good widescreen (about 1,85:1) image quality, but a running time of a mere 82 minutes. Obviously several smaller cuts were made, especially during the first half of the movie. It made an already confusing movie nearly incomprehensible. Torrents floating on the net, using Hebrew VHS as a source, have a longer running time, but image quality is pretty awful. The Australian DVD of Bounty Entertainment, released in April this year, appears to be uncut, but is fullscreen (*2). This might cause some problems since director Merino and cinematographer Fausto Rossi use the widescreen to good effect (even in 1,85:1 the image suffered a little).