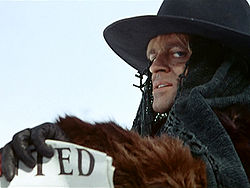 Klaus Kinski was born Nikolaus Karl Günther Nakszyński on October 18, 1926 in Zoppot, Germany (now a part of Poland). His father was a Polish-German pharmacist and his mother was the daughter of a German pastor from Danzig. The family moved to Berlin when Klaus was 4 years old, and he attended the Prinz-Heinrich-Gymnasium in Schöneberg. He joined the German army in 1944 and served in the Netherlands, reportedly going AWOL, surrendering to British soldiers, and then spending the rest of the Second World War in a POW camp. It was in the prisoner-of-war camp that he started acting, putting on plays for fellow prisoners.

After the war, he changed his name to Klaus Kinski and started out acting on stage, performing the works of Shakespeare. He begun acting in films in 1948, and by 1965 was known to international audiences. He portrayed the humpbacked member of Indio's gang in Sergio Leone's For a Few Dollars More. He acted in a string of spaghetti westerns after that, including Sergio Corbucci's The Grand Silence, A Bullet for the General and If You Meet Sartana Pray for Your Death. However, he is perhaps better known for his collaboration with German director Werner Herzog on Aguirre: The Wrath of God, Woyzeck, Nosferatu the Vampyre, Fitzcarraldo and Cobra Verde.

While Kinski was a talented actor, highly dedicated to his craft, he had a volatile temper that made him hard to get along with. One time, while acting on stage, and failing to get the reaction he wanted from the audience, he threw a burning candelabra at them, almost burning the theater down. While filming Aguirre: The Wrath of God with Herzog, he was annoyed by the noise being made by some cast and crew playing cards. He fired a gun at the hut where the game was going on and blew off an extra's finger.

Kinski was married three times. Among the children he acknowledged are two daughters, Nastassja Kinski and Pola Kinski, and a son, Nikolai Kinski, all of them actors. He died of a heart attack on November 23, 1991 in Lagunitas, California. He was 65.

Retrieved from "https://www.spaghetti-western.net/index.php?title=Klaus_Kinski&oldid=138200"
Category:
Cookies help us deliver our services. By using our services, you agree to our use of cookies.