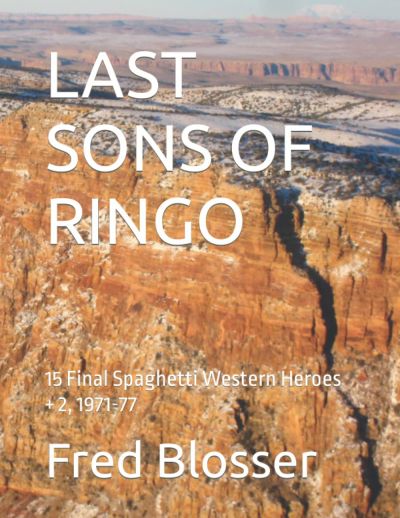 The Italian-made or "Spaghetti" Westerns of Sergio Leone and his colleagues revitalized the cinema of the American West in the tumultuous 1960s and '70s, with violent stories and ruthless heroes who perfectly captured the unrest and cynicism of the Vietnam and Watergate era. LAST SONS OF RINGO: 15 FINAL SPAGHETTI WESTERN HEROES + 2, 1971-77, examines 17 emblematic films and their stars from the height of the genre's global popularity to the final years of its decline. You've heard of Lee Van Cleef and Ty Hardin (one of the models for Leonardo DiCaprio's character in "Once Upon a Time in Hollywood"), but what of Jeff Cameron, George Hilton, and Robert Woods? LAST SONS OF RINGO scrutinizes the elements that continue to draw new fans to the Italian Western decades later. Together with its predecessors by Fred Blosser, Sons of Ringo: The Great Spaghetti Western Heroes and MORE SONS OF RINGO: 15 Great Spaghetti Western Heroes + 1, 1965-70, it provides an invaluable reference to movies that still cast a long shadow over our culture.