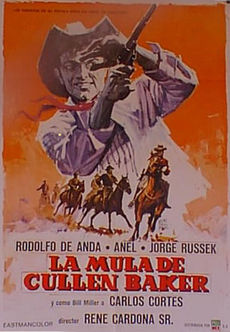 A young Cullen Baker rides his mule throughout the old west with his father, when bandits attack them, killing his father. Cullen becomes a loner, again riding a mule through the west and getting into trouble wherever he goes. When a soldier shows him the Colt Dragon revolver, a newly invented six shooter, he becomes obsessed with obtaining this gun as a means to empower himself. After murdering two soldiers and taking their revolvers, Cullen proceeds to rob banks and shoot down anyone who dares confront him.

Retrieved from "https://www.spaghetti-western.net/index.php?title=La_mula_de_Cullen_Baker&oldid=128118"
Categories:
Cookies help us deliver our services. By using our services, you agree to our use of cookies.