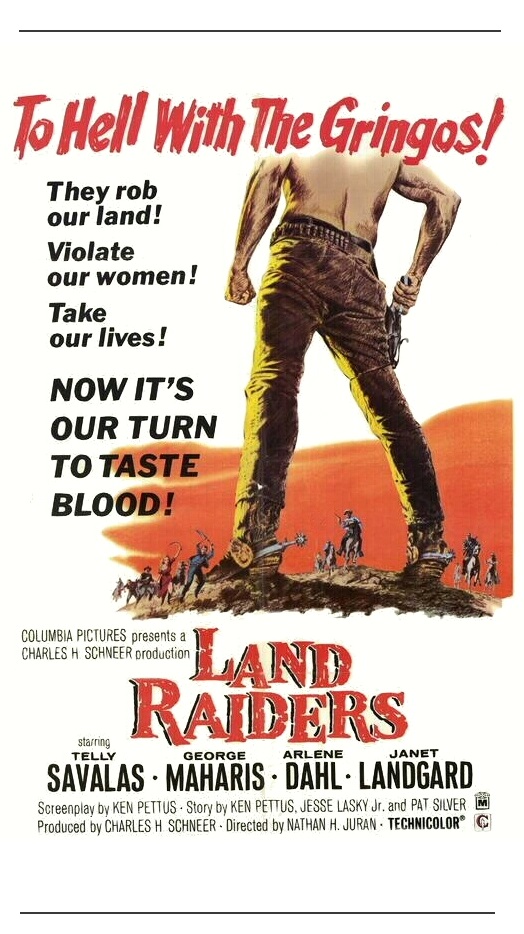 An cheaply made American western, shot in Europe (*1). At home it was released around the same time as milestone movies like Butch Cassidy and the Sundance Kid, The Wild Bunch and Little Big Man, and therefore largely remained under the radar; in Europe it tried to jump on the band wagon of the spaghetti westerns, but failed to make any real impression. It stars Telly Savalas, who would become a regular in late spaghettis and pseudo-spaghettis in the years to come.

Savalas plays a land baron of Mexican descent; his birth name was Vincente Cardenas, but he has changed it into Vince Carden because he wants to live like a real ‘Gringo’. He also wants to clean the border region from Apaches and is therefore offering a prize for every scalp brought to him. His brother Paolo (George Maharis) ran off years ago, after he was held responsible for the death of his fiancée Luisa, who carried the child of another man. Paolo returns to his home town to reconcile with his moribund father and his Mexican heritage. Things lead to a violent climax when Vince tries to provoke a war between the white and red men by organizing an attack on the stagecoach and putting the blame on the Apaches ...

The film has a very busy, flashback-driven script and lots of violent action, so it’s is not dull, but like most of these hybrid westerns made in the late 60s, early 70s, it lacks authenticity. The director and some of his actors mainly worked for television (Maharis is best known as Buzz Murdock from the TV series Route 66) and Land Raiders often looks like a TV movie, albeit one with added doses of rather strong violence, including scalping and a bloody raid on an Indian village. Some stock material was inserted to create the impression of a large-scale production, but the effect is counter-productive. Telly Savalas is hard to accept as a man of Mexican descent, but he sure knows how to play a mean S.O.B. It’s also a bit difficult to see Savalas and Maharis as brothers (‘Cain and Abel out West’): they seem to come from different worlds, but ironically both men had a common ancestry: they were both of Greek descent.

Land Raiders is a pedestrian affair. Most plot elements - such as racial tensions and identity problems - are only hinted at, never really treated in depth and most storylines seem underdeveloped, resulting in a rather disjointed narrative. The film has a nice Bruno Nicolai score and there are a few familiar European faces (notably Fernando Rey as a priest), but there’s no real spaghetti western atmosphere. Those who like their westerns nasty and violent may nevertheless want to see it. 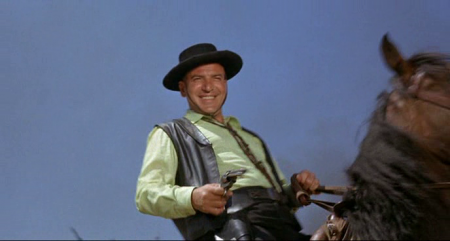 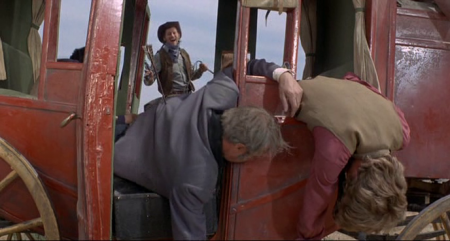 Simon Gelten is a long time contributor to the SWDb. "I'm not as old as Tom B. but I'm working on it. I hope to catch up with him by the end of the next decade.", he says. Simon saw all movies by Sergio Leone and several by Sergio Corbucci in cinema, most of the time in Eindhoven, the city where he was born. Currently, Simon is living in Turnhout, Belgium. Simon is active within the database as both Scherpschutter and his alter ego Tiratore Scelto.
Retrieved from "https://www.spaghetti-western.net/index.php?title=Land_Raiders_Film_Review&oldid=114955"
Category:
Cookies help us deliver our services. By using our services, you agree to our use of cookies.