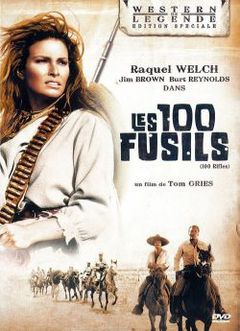 A halfbreed Yaqui Indian (his father was from Alabama …) robs a bank in Arizona in order to buy guns for his people, who are brutally repressed by the Mexican federal government. He is persecuted into Mexico by a black deputy sheriff, who hopes to get a permanent assignment as a lawman by bringing the half breed to justice. A personal conflict arises with federal general Verdugo, and the deputy is therefore forced to cooperate with the half breed. When they’re about to be executed by Verdugo, they’re saved by a rebellious group of Yaqui, led by a fiery red-headed woman called Sarita. She wants the black man to join the Yaqui in their fight against the federal troops, but like he says, their fight is not his business, and he never liked Indians anyway. But Sarita has other ways to convince a man …

The film wasn’t very successful when first released, but shocked people with a daring love scene between a black man and a white woman. It also owed some notoriety to a scene in which Raquel Welch takes a public shower under a water tank. The script vaguely refers to an ethnic cleansing, by the Mexican government, of the Northern Mexican province of Sonora in the first decades of the Twentieth century, and also tries to make a few hints at racial prejudices. Neither of the two aspects is really elaborated, but serve as a background for this eventful action western, one of the better spaghetti-influenced Hollywood westerns. 100 Rifles has its flaws, but it’s violent and sexy, and has a rousing score by Jerry Goldsmith.

Video & Audio: The film is presented in the intended aspect ratio of 1,85:1. It has been enhanced for widescreen (16x9) TVs. 100 Rifles is over forty year old and the source prints must have betrayed their age and forced the company to some radical filtering. As a result, the video quality varies a little. In several scenes the image is rather soft, occasionally even a bit hazy, probably because too many noise reduction was applied; other scenes are a bit sharper and offer more vivid colours, but are at the same time a bit grainier. Some sideward pans tend to lead to smudgy outlines and a certain lack of clarity. But, as said, it’s a movie of a certain age, and overall this DVD is a pleasure to watch. The audio comes in two languages, English and French. Dialogue is understandable throughout on the English track, and Jerry Goldsmith’s score is done justice (although the main theme sounds a bit shrill during the opening credits). I’ve only tested the French language track briefly, but it seems equally good. The main problem is – as more often with French discs – that the French subtitles are forced when choosing the English audio from the menu.

Extras: The discs offers a trailer and two so-called presentations, one by film historian Patrick Brion, the other by famed film director Bertrand Tavernier. The first gives a rather academic introduction to the movie, the latter talks with a lot of enthusiasm about the two most infamous scenes, about director Tom Gries and Jerry Goldsmith’s score. He also discusses the cinematographic choices director Gries and his cameraman made (he seems to like Gries a lot) and points at some of the anomalies in the script, probably due to 20th century Fox’ decision to re-edit the movie against Gries’ wishes. Both introductions are well-presented and enlivened with photos, stills and clips of the movie. They’re of course both in French and there are no subtitles.