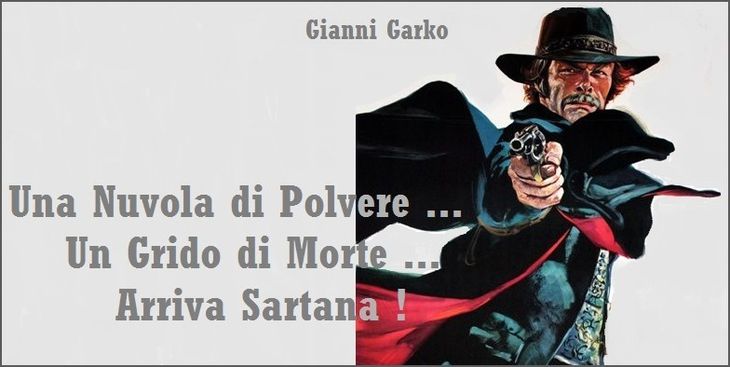 The fourth and last Sartana movie with Garko, and no doubt the most crack-brained of them all. Sartana is equipped with a new array of weapons and gadgets, including a miniature robot in the form of a totem, called Alfie, who can be programmed to kill. Sartana is looking for half a million of gold and two million dollars of counterfeit money, embezzled by a former friend called Grandeville Full, Grand Full for short. Grand Full has been arrested, so Sartana hands himself over at the state prison in order to spring his old pal from jail. Also interested in the money are a tricksy widow, a one-eyed drifter, a corrupt sheriff and a deaf and deranged revolutionary general, a kind of Baron Münchausen spaghetti western style.

The script is constructed like a detective story and Sartana has been given some of the dry wit of the classic sleuth as well. It suits him fine. He is no longer the spectral avenger, but a more down-to-earth character, almost an anchor in a series that has gone adrift. The script offers the usual collection of double-crossings and back-stabbings: friends become foes and even a husband and a wife may become deadly enemies. Sartana’s only trustworthy ally in this rather nihilist world is an old timer called Pon Pon, who discovers an indication in the form of a device that reproduces, in a symbolic way, the depository of the money, but he is killed before he can reveal his discovery to Sartana … 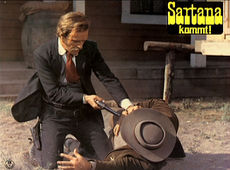 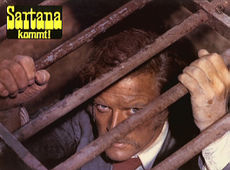 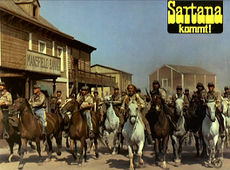 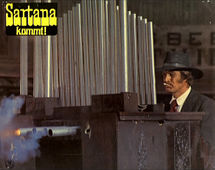 In his book, French author Giré (1) calls this movie one of the richest outings illustrating the evolution of the Italian western. Filmed in the tongue-in-cheek style of the series, it inherits some of the violence and bleakness of Leone's trailblazing Dollar movies, but also adopts the more parodist aspects of the genre, brought into vogue more recently. The early scenes in the state prison are unusually grim and nasty, with wardens urinating over the inmates and throwing acid at one of them, but there’s also this scene in which a man – the fastest gun in town – is unarmed by shooting off his belt and pants that represents all the silliness that had overtaken the genre when this film was made.

With its underground prison cells and fancy costume design the film has a nice, sophisticated look. Among the nicest references to the Leone movies is the presence of Mara Krupp, the lady with the big nose & knockers, who reprises her part as the horny hotel woman from For a Few dollars More. Some think this is the best Sartana, but I’m not sure what to think of it. The film is baroque and flamboyant and there’s hardly a dull moment, but the ultimate goofiness of some of the gadgets make up for a confusing movie experience. The finale, with Garko cleaning up the town’s main street with his organ, can be interpreted as a witty reference to the scene in Corbucci’s Django, with Franco Nero digging up his machine gun from his coffin, but it also oversteps the line between parody and travesty.

Like the movie, Bruno Nicolai’s score seems to combine more traditional and more modernist elements. I wasn’t impressed by all of it, but the theme music is particularly fine. Franco Pesce as Pon Pon and Nieves Navarro as the deliciously wicked widow stand out in a first rate spaghetti western cast. Garko simply is Sartana by now, and José Jaspe’s Monk may well be the most deliriously insane character ever spotted in a western east of the Rocky Mountains. I wasn’t very fond of Alfie, by the way.

Retrieved from "https://www.spaghetti-western.net/index.php?title=Light_the_Fuse..._Sartana_is_coming_Review&oldid=101367"
Categories:
Cookies help us deliver our services. By using our services, you agree to our use of cookies.