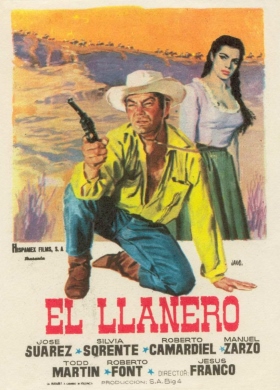 This unusual western from prolific director Jesus Franco begins in 1863 Venezuela during the closing days of the civil war. Georges Rollin, in his final role, portrays Col. Saltierra, who storms the hacienda of ruling Colonel Mendoza (Felix Dafauce) and kills everyone inside except for Mendoza's son Jose (Jose Suarez), who escapes with a servant (Roberto Camardiel). Several years later, Saltierra has gained complete control of the area, but finds himself constantly sabotaged by a shadowy band of revolutionaries led by a man known only as "The Jaguar." At this point, the film turns into more of a romance than might be expected, as Jose falls in love with Saltierra's pretty daughter Ines (Marta Reves). Ines is engaged to marry Lt. Alberto Kalman (Todd Martens), but Jose intervenes, leading to the expected conclusion. Silvia Sorente's steamy performance as a dancer-informant is the highlight of this entertaining curio, which also includes an appearance by 1960s pop stars Los Machucambos as a trio of revolutionaries.

Retrieved from "https://www.spaghetti-western.net/index.php?title=Llanero,_El&oldid=128165"
Categories:
Cookies help us deliver our services. By using our services, you agree to our use of cookies.