It’s well known that the early to mid seventies were when the Spaghetti Western genre was dying down and turning into a giant parody of itself. The genre had turned against itself with deprecating humor, anti-macho sentiments, and overboard slapstick comedy. Filmed in 1973, Lo Chiamavano Tresette... Giocava Sempre Col Morto has been generally regarded with contempt for these very reasons, in fact I think it takes those ideas to an extreme. And to add to the contempt, the English dub with it's perverse and un-genre like behavior helps push that extreme to the end of the spectrum and off a giant cliff. However I personally view the film in a kinder light, I’m not going to say it’s any sort of diamond in the rough, but I’d say it has some merits to it, and certainly deserves some attention.

Bambi and his talking horse Mr. Thompson have become sheriff’s of Apple Pie City. They are entrusted by Mayor Apple and president of the bank Archibald McPieDish to deliver a shipment of gold to Dallas. They also entrust gunslinger Tricky Dicky/ Tresette to go along with Sheriff Bambi to Dallas. Along the way wacky shenanigans happen, and Tricky Dicky and Bambi must also deal with a pestering leather clad Twinkle Toes/ Veleno who is obsessed with having a gundown with Tricky.

Though there’s a small twist in the middle when it’s revealed that the gold is painted lead, and Tricky and Bambi are framed for it’s disappearance, the story is honestly straight-forward and not anything special. It’s more of a vehicle for Hilton and Huerta to jump on the Spencer and Hill bandwagon for some quick laughs and some easy bucks. But for whatever reason, the studio handling the English Dubbing decided against a literal translation of the film and opted to present their own version, complete with American political jokes.

If you noticed a few characters had their names changed around, Tresette became Tricky Dicky and Veleno (Italian for Poison) became Twinkle Toes. And it wasn’t for no reason either, Tricky Dicky was a nickname for then President of the United States Richard Nixon, champion of the Watergate Scandal, and there are several instances of characters making jokes about Tricky once being a politician and even at the end an instance of Twinkle Toes yelling “Tricky Dicky come back here and meet your Watergate!”

These weren’t the only changes in the English dub however, surprisingly the entire dub is filled with homosexual innuendos and even some blatant mentions of sexual acts, the most notable of which includes Pietro Ceccarelli’s character having the following exchange with Tricky Dicky:

“Talking about loners Tricky, where’s that fat faggot you had with you?”

“We parted. Hey now lover, am I the type that goes for an old pot bellied sheriff?”

“Noo… little boy’s are more your style Dicky.” (At this point Hilton gives a bashful little laugh and bat’s his eyes.)

This is just a small taste of the strange changes the English dub makes to the source material. Twinkle Toes entire personality changes as well. As mentioned before in the Italian dub his name is Veleno, and his Italian dubber portrays him with a more genre appropriate macho type character, however in the English dub Twinkle Toes periodically becomes high pitched and effeminate during moments of agitation. When first viewing this film I was completely taken aback that something from this time and in this genre got away with so many lewd comments, especially in a decade where homosexuality wasn’t exactly a welcome topic. Perhaps this is why I think so positively of this film, because the dubbing helps it to be such a different creation compared to the many Django and Dollar’s films rip-off’s. It’s a strange choice of course, and it ends up being an odd result, but it’s original.

Giuliano Carnimeo’s always lively direction helps keep the film afloat, and he let’s the story move along at a healthy pace so we’re not focused on the slapstick gags for too long. The cinematography by Stelvio Massi is always a pleasure to enjoy, with some nice framing and depth to the shots throughout. His trademarks zooms and focusing are all put to good use as usual and help this average genre film feel more professional. All of the performances are well executed and are also fairly enthusiastic. You can see that Hilton and Huerta are enjoying themselves while participating in this rather strange venture. I will admit it’s not the strongest film for any of the crew here, but it’s by no means terrible, as there is some care put into the creation of the film. Overall I found myself to be pretty engaged, it succeeds at being a slapstick comedy as even if it didn’t have the English dub I’d find myself fairly amused by it and the little fights and actions are all well directed by Carnimeo. I will say though it’s not for everyone, and if you don’t have the patience to sit through or aren’t interested in bizarre or silly films, don’t bother watching this. You can live without it.

This music here is notable due to it being Bruno Nicolai’s final Spaghetti Western score. The opening theme appears in variations throughout the film as a lighthearted piece that opens with a solo violin slowly rising, then is accompanied by a banjo as it moves into a cute little country style piece. Twinkle Toes’ is accompanied by an ugly little waltz theme with a piano and violin, and throughout the film other little light themes utilizing banjos and woodwind ensure that the film never feels too serious (as if it needed any help). Tricky Dicky has a large music box that plays little chimes, and in one moment is accompanied by a dramatic rendition of Chopin's Funeral March during a showdown. Several pieces of the music were featured in the 2004 video game Red Dead Revolver during the in town sequences. The entire score is in full stereo and has been released on CD twice by Beat Records, once as part of a compilation, and again in expanded form in 2012.

I had a difficult time finding a copy of this film, mainly because the Italian version from Flamingo seems to be out of print. I finally found an English language version on Amazon from Southern DVD. It’s a cheap little thing that comes in an underwhelming clear plastic case with a scan of the locandina on both sides. It also uses an alternate English title of the film, which is “Once Upon a Time in The West… There Was a Man Called Invincible”. The disc is also Region 0 which is nice of them. The picture quality is not fantastic, but it’s head and shoulders above VHS quality and doesn’t make you want to claw your eyes out, also it’s presented in it’s original aspect ratio of 2,35:1. Small speckles and age related wear constantly move across the screen, and there’s some slight glitches in the picture as well that could be due to the digital transfer. The image itself is pretty soft, though there’s a little more detail in closeups when a character is holding still, but it’s still not the greatest to look at, and it only becomes worse due to the film suffering from some digital compression and some ugly interlacing. You’ll notice in a few of the screenshots how apparent it is. The one positive I can say about the image is that the colors are wonderfully vibrant which make the viewing experience a little easier to enjoy, though they seem a tad brown in parts. Two audio tracks are included, English and Italian, both are in mono. The English tracks sound quality is actually above par, there’s a little bit of hiss and crackling, but it’s hardly an issue as the audio is loud and clear. Highs and lows are distinct with no distortion and is generally a pleasure to listen to. The Italian track isn't as crisp as the English and is a little muddled, but it’s serviceable. There’s no subtitles and only one “bonus feature” on the disc which is an English language trailer for the film, which is fairly unremarkable. For how obscure the film is, this is an acceptable release, and I should be glad it’s at least available on DVD. Though if you come across the Italian language Flamingo version, try and snatch that one as I’m sure it has somewhat better image quality (though no english options). 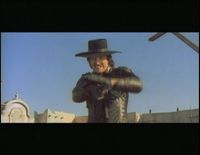 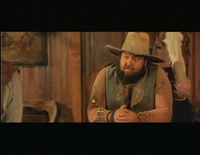 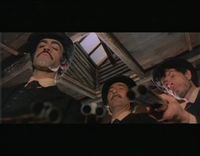 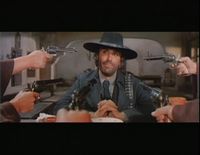 The films Italian title, Lo Chiamavano Tresette... Giocava Sempre Col Morto is actually a sort of play on the character's Italian name Tresette. Tresette is a card game, and when translated to english it essentially states that the main character is named after and plays a card game but instead of playing with cards he plays with dead people. Also Tresette is Italian for three sevens.

Retrieved from "https://www.spaghetti-western.net/index.php?title=Lo_chiamavano_Tresette..._giocava_sempre_col_morto/review&oldid=122619"
Category:
Cookies help us deliver our services. By using our services, you agree to our use of cookies.