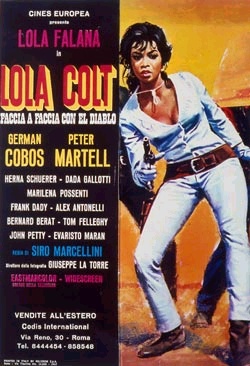 The Spaghetti Western genre, in fact the Western genre in general for that matter, has always been a male dominated place. These were films almost exclusively made by men for men and the women who took part often did so in a marginalised sense; appearing as victims, eye candy or both. This is undoubtedly one of the failings of an otherwise vibrant genre and it is to the credit of those women who did make a career in these films that their presence became memorable despite the chauvinism of the arena in which they worked. Occasionally though, a female performer managed to feature as a lead and Lola Colt is a prime example, not only of one of these rare occurrences, but also of why they so often failed to succeed.

Like Little Rita of the West of the same year, Lola Colt is a vehicle for a musical performer. But unlike the former, this film is not an all out musical. Rather it shoe horns in a handful of saloon scenes where Miss Falana's talents as a singer and dancer can be showcased. These are the scenes where Lola is obviously most at home and it is clear from them that she was a terrific performer in her own field. Unfortunately, the rest of the film is merely window dressing; a flimsy inconsequential plot played out with little conviction by anyone concerned and as a result you find yourself hanging out for the next musical number. Not something I would often say in connection to viewing a Western.

The plot itself, for what it is worth, is as follows. Lola and her performing troupe arrive in town with one of their party sick with what turns out to be malaria. They need a doctor but the only person available is Rod (Peter Martell) who is studying medicine but has yet to qualify. This is due to his being caught up in the town's problem which is its being held under the boot of local bad guy, El Diablo (Germán Cobos). El Diablo has taken a bunch of the townsfolk hostage at his nearby ranch and is gradually bleeding the community dry with ransom demands while his men generally cause havoc in the area. Lola, whilst taking a shine to the good looking medical student, encourages Rod to rise up against their oppressor but he and the other men of the town are reluctant to endanger the lives of the hostages. Eventually though Lola convinces them to act and leads them in a rescue mission on El Diablo's ranch. A mass gunfight ensues and when the dust settles Lola leaves town with her love interest in tow.

All of the above comes complete with occasional romantic clutch scene and suitable, if chronically cliched, flashback to explain Lola's determined feistiness and unwillingness to be the victim of mean spirited bullies. All reasonable stuff but all equally just a bit half hearted; leaving the impression that the whole thing was thrown together in order to fill the space between Lola's leg kicking, bum wiggling song and dance numbers. Fair enough, one might say and I wouldn't argue for the most part. Miss Falana had genuine talent in this area and was clearly more comfortable singing and dancing than she was acting. But I can't help but feel that with a little more imagination on the part of the producers she could have been offered something more interesting in the way of story and character and, who knows, she might just have proved herself more than capable of carrying a better all round film. Either that or they should have concentrated on her obvious strengths and gone down the full blown musical line a la Little Rita of the West.

The really annoying thing is that, in isolated spots, the film has some genuinely promising moments. Moments which when you look back at the entire film seem completely out of place with the rest of the piece. Foremost among these is the opening scene where we first see El Diablo at his most diabolic. The town's priest walks to the edge of town to plead with the villainous boss to spare the lives of a couple of unfortunates he is preparing to punish. The catch is in how the punishment is set to be carried out. In a film based mainly around a cabaret act it is something of a surprise to open the proceedings with a couple of exploding crucifixions. But that is exactly what we are treated to and as El Diablo rides off to the backdrop of these obliterated unfortunates we could be forgiven for expecting more of the same. Unfortunately, it proves to be an anomaly in an otherwise tame narrative. The only other time we get close to this level of nastiness is during Lola's flashback scene where we witness her family being mounted on wagon wheels and shot at for fun by a bunch of unidentified villains while little Lola watches on tearfully behind the windows of the house. The drama of this scene however is completely counteracted by the fact that the girl playing Lola as a child is clearly of a totally different racial make up to our adult star. Lola Falana is an Afro American of Cuban extraction but the girl in Lola Colt it appears she has a background as a poor white child. I know the budget was probably tight but surely they could have found a black girl somewhere in europe to play this little non speaking part instead of slapping some brown make up on some unfortunate child actor from the Elios backlot?

In reality I suppose it doesn't matter so much and is no more out of place than the soul funk accompaniment to Lola's musical numbers which are not only chronically anachronistic but also clearly feature a saxophone, electric guitar and full drum kit despite the band on show wielding a banjo, squeezebox and piano. At the end of the day it is just a movie and a light weight one at that. It obviously never sets out to be anything serious and as a result should be judged on its own terms. In that way it is fair to say that the film is generally entertaining enough and that based on her musical numbers Lola Falana was a pretty impressive performer in her day. Consequently I could easily see this movie becoming a 'guilty pleasure' for some. For me though, its inconsistencies outweigh its pleasures and I suspect any future viewings on my part will be with the liberal aid of the fast forward button.

Ulimately Lola Colt is an interesting genre entry as a rare female led one but anyone hoping for a quality Spaghetti which upturns all the usual sexual stereotypes of the genre will be sadly disappointed.

The copy of this film I watched was a composite one using an Italian TV widescreen image with English dub from an inferior VHS release laid over where possible. The Italian version is longer and as a result the English audio drops out on occasion but as the film is not of an overly complex nature it had no real detrimental effect on my ability to follow the narrative in any way. If you only get to see the English VHS release though you will miss out on a number of scenes, the opening exploding crucifixions being the most notable among them.--Phil H 11:53, 1 December 2009 (UTC)

Retrieved from "https://www.spaghetti-western.net/index.php?title=Lola_Colt_Review&oldid=52323"
Category:
Cookies help us deliver our services. By using our services, you agree to our use of cookies.