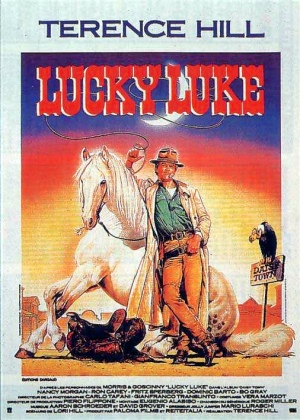 After a quick history of how the West was won, complete with a peace treaty signed by Indians to permit US expansion, Daisy Town springs up. It's a rough-and-tumble place until Lucky Luke (Terence Hill) and his horse, Jolly Jumper (voiced by Roger Miller), who serves as the film's narrator, hit town. Luke quickly cleans up the town, which proves bad for the once bustling saloon and undertaker businesses.

Retrieved from "https://www.spaghetti-western.net/index.php?title=Lucky_Luke&oldid=133273"
Categories:
Cookies help us deliver our services. By using our services, you agree to our use of cookies.