From The Spaghetti Western Database
(Redirected from Luigi Pistilli)
Jump to: navigation, search 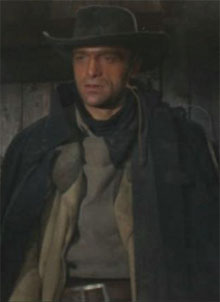 At one time Luigi Pistilli was one of Italy's most respected actors of stage, screen, and television. In theater, he was considered one of the country's best interpreters of Bertolt Brecht's plays; indeed, his most famous roles were in The Threepenny Opera and St. Joan of the Stockyards. Pistilli studied acting at Milan's Piccolo Teatro, graduating in 1955. He never completely severed his ties with the theater and often returned to appear in plays directed by Giorgio Strehler. Pistilli made his feature film debut with an uncredited role in Dark Passage (1947). He often appeared in such spaghetti Westerns as The Good, the Bad and the Ugly (1966) and For a Few Dollars More (1965). Pistilli's television career has included a regular role on the popular Mafia drama The Octopus. Pistilli committed suicide in his Milan home just before appearing in the final production of Terrace Rattigan's Tosca on April 21, 1996. The show had been harshly panned by critics and audiences and this apparently threw Pistilli into a deep depression. According to his suicide note, Pistilli had suffered even deeper despair after making some bitter public comments regarding the recent termination of a four-year off-stage relationship with singer/actress Milva, with whom he was co-starring in Tosca.

The following 10 pages are in this category, out of 10 total.

Retrieved from "https://www.spaghetti-western.net/index.php?title=Category:Luigi_Pistilli&oldid=103284"
Category:
Cookies help us deliver our services. By using our services, you agree to our use of cookies.