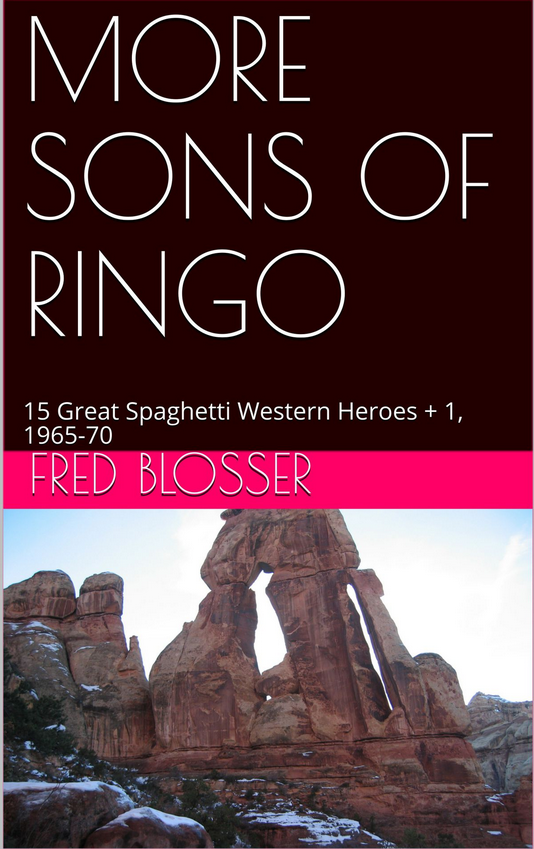 “Where life had no value, death sometimes had a price.” More than fifty years after their initial release, the cynical, violent Italian Westerns of the 1960s continue to draw veteran fans and new ones alike on home video and streaming platforms. The prodigious talents of Sergio Leone, Sergio Corbucci, and other masters of the genre exert an undying fascination that continues to reverberate in today’s tumultuous times.

Leone, Corbucci, and others have gained wide name-recognition over the years, most recently thanks to Quentin Tarantino’s “Django Unchained” and “Once Upon a Time in Hollywood,” but how about their many colleagues and contemporaries in the Spaghetti Western? How about movies like “Django, Kill . . . If You Live, Shoot!” and “Kill and Pray”? How about great characters like Tony Anthony’s “The Stranger,” Chip Corman’s “El Desperado,” and Giuliano Gemma’s “Arizona Colt”?

MORE SONS OF RINGO: 15 GREAT SPAGHETTI WESTERN HEROES + 1: 1965-1970, surveys these and other characters and movies from a representative sample of Italian Westerns at the high tide of the genre. It is a sequel to SONS OF RINGO: THE GREAT SPAGHETTI WESTERN HEROES (2020) by Fred Blosser, whose articles and reviews have appeared in “Cinema Retro,” “The Dark Side,” “Mystery Scene,” Hollywood.com, and other publications and on-line sites.

Retrieved from "https://www.spaghetti-western.net/index.php?title=MORE_SONS_OF_RINGO:_15_Great_Spaghetti_Western_Heroes_%2B_1&oldid=124593"
Category:
Cookies help us deliver our services. By using our services, you agree to our use of cookies.