A bounty hunter comes to White City and takes offence when arrogant Lucas Carson, the son of the town’s wealthy saloon owner, bullies Logan, a seemingly helpless man on a crutch. The bounty hunter interrupts the cruel entertainment by pounding Lucas to a pulp. Carson Senior becomes suspicious of the bounty hunter, who carries a photograph of Carson’s mistress, Trudy. Carson has reason to be wary, and not only because of Trudy. With the help of his brother Donovan, a bank robber, he maintains his vast fortune by extorting the local homesteaders. Pay up or die. The bounty hunter carries wanted posters for Donovan and several of his henchmen. Donovan alone is worth $25,000. 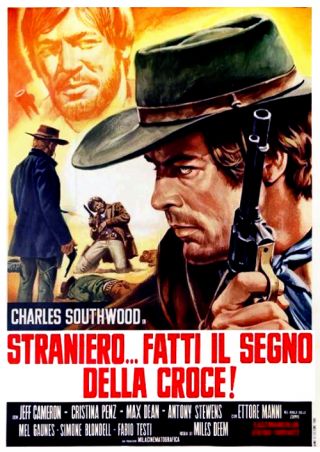 With Trudy’s help, Lucas and his father’s other henchmen apprehend the bounty hunter. Taking him to a back room of the saloon, they beat him to find out why he’s nosing around. Lucas relishes the chance for payback. The stranger refuses to talk, and Carson throws him in jail pending another interrogation. Once Lucas and his buddies have left, Logan shows up and frees the bounty hunter. Seemingly, he does so to repay the stranger for his earlier help in the saloon. But he has other reasons too, which are disclosed later in the movie in a couple of Sergio Leone-type flashbacks involving the mysterious Trudy.

The nameless bounty hunter is played by Charles Southwood, who has the hooded eyes of a younger, less weathered James Coburn.[1] 'Ettore Manni plays Logan. Jeff Cameron plays Lucas, first seen as he arrogantly rides his horse into his father’s saloon. Lucas throws his weight around, mostly because he can since everybody fears his father. But he’s despised by his father and his uncle as an “imbecile” and “coward.” Their contempt is fuelled by Carson’s doubt that Lucas is really his son. Lucas is like the characters played by Alex Nicol and Dennis Hopper in the 1950s American Westerns The Man from Laramie and From Hell to Texas, the weak but overbearing sons of powerful cattle barons.

But there’s a final scene for Cameron, in a showdown with Southwood’s character, in which we’re forced to moderate, if not completely excuse, our own scorn for Lucas. The end of the movie follows, replicating the close of For a Few Dollars More as the bounty hunter rides off with the corpses of Donovan and three of his henchmen dumped on the back of their horses.

Since this is a movie by Demofilo Fidani, alias “Miles Deem,” and in fact the first of his fifteen generally derided Spaghetti Westerns, it takes its time in getting to the point. First, it meanders through several scenes that seem to be unrelated to each other, or only tenuously so, before the story begins to fall into place. The scenes include an opening bank robbery with brutal but cartoonishly edited violence (a church lady yells for help when the robbers rush out of the bank, and Donovan throws a knife into her), and a comedy bit in which three of Donovan’s thugs coerce Southwood’s character into a shooting match. The bounty hunter has to demonstrate his skill by blasting eggs out of the air before they fall and splatter on his head. Depending on your mood, you might decide that Fidani has gone Sergio Leone one better in designing a cleverly baroque shooting contest . . . or you’ll simply throw up your hands at the goofy concept. 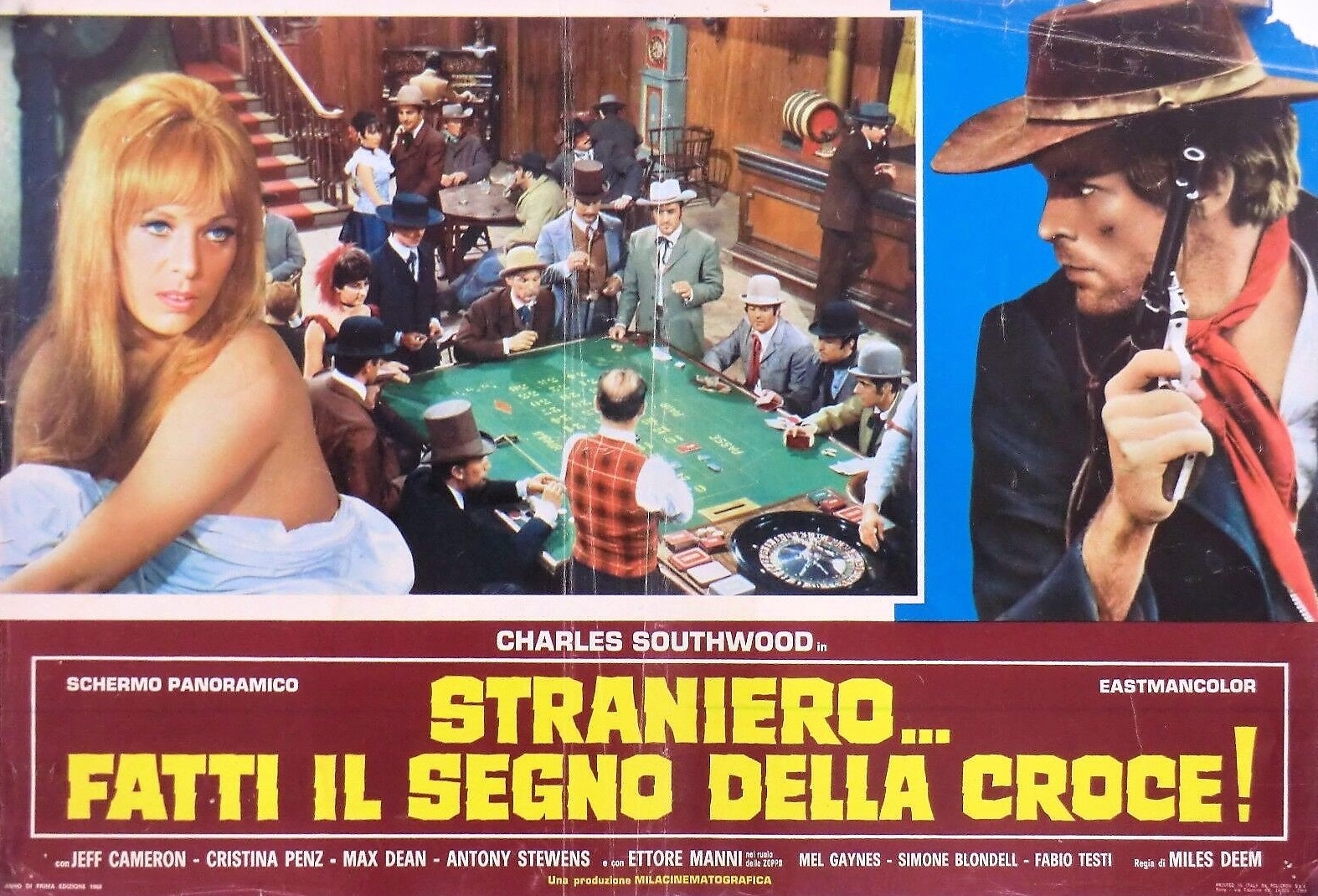 The actor playing "Willie," one of the three thugs, is billed as “Ariston Massachusset,” but he’s really Fidani’s camera guy, Aristide Massaccesi, better remembered today for his later career in his own director’s chair as Joe D’Amato. Like Massaccesi, most of the other cast and production crew would continue their association with Fidani over the rest of his Western career, including Jeff Cameron, actress “Simone Blondell” (actually Fidani’s sultry-eyed daughter, Simonetta Vitelli) and supporting performers Dino Strano and “Custer Gail” (Amerigo Castrighella). The most accomplished actor in the cast, Ettore Manni, appeared in Fidani’s other 1968 Western, And Now . . . Make Your Peace With God!, and would re-team with the director in the final “Miles Deem” Western, Anything For a Friend (1973), billed there as “Red Carter.” Cristina Penz (Trudy) and Fabio Testi (as one of Donovan’s henchmen) were also in the other 1968 picture. [2]

Some viewers may like “Make the Sign of the Cross, Stranger!” better than the Fidani films that followed. The shootouts are competently staged and the Western sets representing White City on the Cinecittà backlot are spacious and respectable. Still, for my undemanding taste, Fidani’s Westerns from 1969 on, with their increasingly ramshackle sets, careless scripting, and cheap casting, have their own trashy charm.

by Fred Blosser, author of Sons of Ringo: The Great Spaghetti Western Heroes

Retrieved from "https://www.spaghetti-western.net/index.php?title=Make_the_Sign_of_the_Cross,_Stranger!_review&oldid=132150"
Category:
Cookies help us deliver our services. By using our services, you agree to our use of cookies.