A Spanish army officer, Don Jose (Nero), stationed in Seville, meets and begins a relationship with a mysterious gypsy, Carmen (Aumont). After he discovers she has cheated on him with his Lieutenant, he kills the officer and flees the city with Carmen. He recovers from his wounds and is forced to begin the life of a bandit.

A very interesting film. Very well made and strongly acted. One of the many curiosities include its locale. Unlike many (almost all) spaghetti westerns, this film is not set in New Mexico, Texas, Arizona, or Mexico. It was filmed and set in Andalucia, Spain. This fact alone brings up controversy. Is it a western if it is set in a foreign land? Yes. The theme, characters, and locations suggest that it is a western. It involves smuggling, bandits, and a stagecoach robbery. The robbery scene is particularly well filmed. It starts as a heist style robbery but things go horribly wrong. It develops into a massacre. This is also the film's only real action scene that includes guns. The other "action" scenes are not big shootouts but mostly knife fights. There are two very well filmed knife fight sequences that are very thrilling and made even better by the great use of camera work. As most of the films I review go, it is very slow paced. The film is a very deep and intense character study and thus, focuses more on the characters than the action. Despite the film's pacing, this is still a very watchable film. It manages to keep the interest high. Only briefly do you lose your interest. The characters are all top notch. The character of Jose is very emotionally confused throughout the film. He is confused as to why he loves Carmen so. She continually uses him and insults him. He is often forced to hit her. The way these characters are presented is similar to One-Eyed Jacks. All the characters are very emotional and intense. Very well crafted. Another curiosity of this film is its basis. This film was a retelling of the famous novella and opera Carmen. This is probably the weirdest aspect of the film. It makes this film into a romance Spaghetti Western! 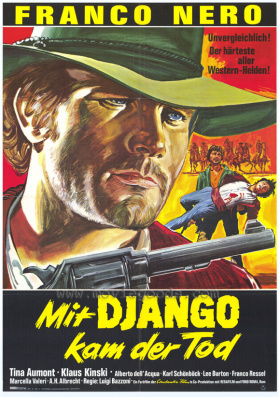 The acting is great. Franco Nero is more "realistic" in this film. He is more human. This was also his first European filmed western in which he uses his real voice. He was taught English through books given to him by director John Huston to prepare for his role in The Bible. He then returned to Europe at the behest of Bazzoni to do this film. That makes this film responsible for returning Nero to his rightful place at the throne of this genre. Tina Aumont is good. It is hard to admit that, since the character she plays is such a B***h that you feel absolutely no sympathy for her. I suppose that means she was good in this. Lee Burton is also good. One of the few more likeable characters in this film. Klaus Kinski has an elongated cameo in this one. A result of his method of finding the highest paying small roles in a film. It is surprising that he acted at all in this film. Prior to this film, he seriously injured his back while auditioning for a role in one of the Stranger films. He has to ride a horse very hard and act out a knife fight. You have to admire his devotion, even if it is only to money.

The music is very good. Most of it is Spanish guitar. A good co-effort by Bruno Nicolai and Carlo Rustichelli.

A very well made spaghetti with a slow pace, but good acting, writing, and story. Not recommended to everyone. Patient people will be awarded by this rarity. 4/5. Man: Pride and Vengeance.

Retrieved from "https://www.spaghetti-western.net/index.php?title=Man:_Pride_and_Vengeance_Review&oldid=48279"
Category:
Cookies help us deliver our services. By using our services, you agree to our use of cookies.