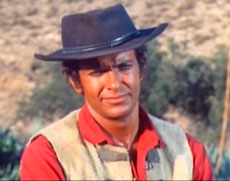 (aka Alan Harris aka Alan Herskovitz)

Mark Damon majored in literature and business administration at U.C.L.A., but it would be as an actor that he'd enter the professional world. Reaching his Hollywood peak in several Roger Corman productions of the 1960s (House of Usher), Damon went on to appear in European adventure films. In 1977, he formed his own production company, Producer Sales Organization; one of his first producing efforts was the movie version of Joseph Wambaugh's The Choirboys. Ten years later, Mark Damon founded another production firm, Vision International.

Retrieved from "https://www.spaghetti-western.net/index.php?title=Mark_Damon&oldid=138982"
Category:
Cookies help us deliver our services. By using our services, you agree to our use of cookies.