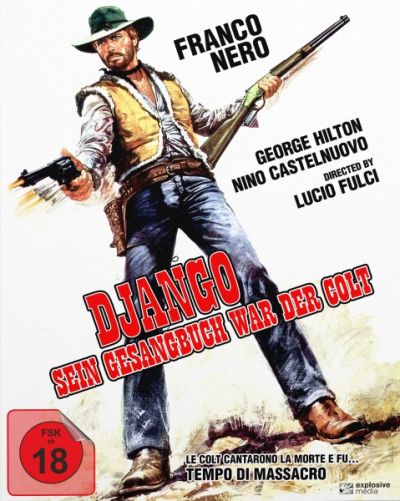 Review of Explosive Media's new BluRay release of Lucio Fulci's Massacre Time, also known as The Brute and the Beast.

Gold prospector Tom (Franco Nero) returns to his home town, where he finds his family property taken over by local tyrant Scott (Giuseppe Addobbati) and his brutal gang of henchmen led by his sadistic son Jason (Nino Castelnuovo). His brother Jeff (George Hilton) drowns his loss in alcohol. He's not happy about Tom's return, for he blames his departures years ago for their misery, while Tom is pissed because Jeff lost their mother's property to Scott and isn't doing anything about it. After beating some of Scott's thugs up in a bar, they follow Tom to the house of Carradine, the local businessman who sent for him, and murder him and his family. While Scott and his son grow apart over the son's increasingly aberrant handling of the family business, Tom is now out to take their empire on, but he'll need his drunken brother's help to put an end to Scott's reign of terror.... 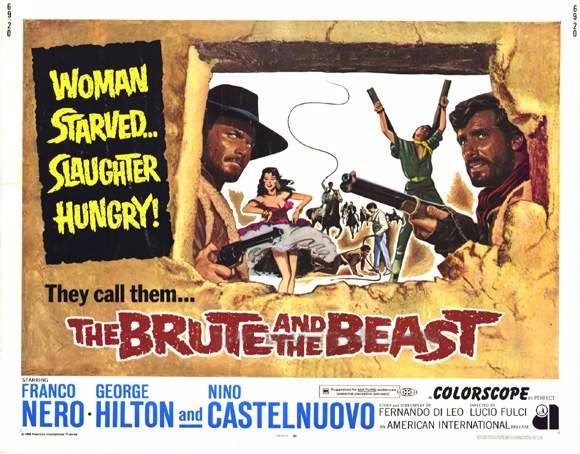 Massacre Time is an interesting case, I think. For one, I think that it deserves to be more popular than it really is. It was among the first spaghetti westerns widely available on DVD, it has A-list names attached to it, it got quite a wide release in the United States back in the day, and it's also an early 1966 spaghetti western with a down and dirty honest setting, not so much like the lighthearted stuff that came out at the turn of the decade. Maybe this BluRay will help put it back on the map? I went to revisit this one after many years and - to be frank - it grew on me, mildly, but rewatching it also revealed its flaws.

It's one of three spaghetti westerns directed by Lucio Fulci (and I think his best among these, the other two being Silver Saddle and Four of the Apocalypse). It carries the least of his fingerprints I would say, but they're not invisible. There's eerie moments, some creative camerawork including rear projection and some gruesome graphic murders. At 92 mins, it's easy to digest, a compact down to earth action western that doesn't waste a lot of time or get sidetracked.

It was written or co-written by none other than Fernando di Leo, notorious polizio director and one to call if you need a gritty subject packaged without much nonsense. He keeps the script on line, but left some room for actors to wiggle out of the straightjacket of this brutal flick. George Hilton, no stranger to the fan, gives kind of a Terence Hill performance. His character is drunk, sloppy, funny (the Italian dub even has him say a few off-screen one-liners that seem out of place), yet quick with a gun and seemingly uninterested in the seriousness of the situation. Franco Nero's Tom on the other hand doesn't smile once, says only what's necessary and shoulders the burden of the quest like a man, takes beatings, humiliation.

Hilton and Nero of course do a great job, as does Castelnuevo, but I can't help but feel that all the gruesome violence (and make no mistake, this movie packs a punch, it's brutal) is diluted by, shall we say, and altogether too easy dealing with their quest by Tom and Jeff. It just doesn't come across as too plausible, they way they jokingly shoot themselves through the baddies, it's all too easy, and the finale is about as emotional as Nero's facial expressions in this one. That's the flaw of the film, it's just never really plausible enough and sorta wastes its grim tone on some dialogue scenes that rip the tablecloth from under it.

The BluRay looks great, especially the colors, but there was more noise reduction and edge enhancement that I had hoped for (especially considering it's a 4K master). True, it"s minimal but I guess a lot of detail of the image still gets lost and it's not crystal clear and crisp, especially once you direct your eyes away from the in-focus faces and notice things like washed out landscapes or the odd object that has overly stark edges where it should be more fuzzy. This is complaining on a high level of course, it's a greally great print and presentation.

The Audio is more interesting. Without being advertised on the cover, and sneakily described English 1 and 2 in the menu, this disc actually houses the original Euoprean English dub, and the English dub made by AIP for its original States-side release. If none of these two strike your fancy (I find them to be not too different), you have an additional choice of the Italian or German dubs. There are subtitles in English (as far as my Italian goes these seem to be very close to the Italian track but could also mean that if they are based on the dub, that the dub is close to the Italian original) or German on the disc. The audio sounds alright, these are all mono tracks, so not much in terms of dynamism, but they're all perfectly fine for your retro evening of spaghetti western enjoyment. Some hissing and slight noise is to be expected, all in all however these sound solid, and you even get some good depths with the musical soundtrack.

There is a handful of extras on this: an interview with Hilton, and an audio interview with Fulci, as well as an audio commentary by Leonhard Elias Lemke and Jonas Erler (in German) - Lemke also wrote the text for the extensive booklet which comes glued into the mediabook. There's also trailers and a gallery. Obviously the two main extras are of little value outside the German-speaking community, but maybe this release will just be the first sign of more to come, with the availability of this master. Unfortunately this disc isn't really listed on a lot of Amazon sites yet, so do keep a look out at your import dealer of choice.

As for subtitles options on the extras, just to clarify these: One Hilton interview is the one from the Wild East disc (atrocious quality) and it has German and English subtitles. The second Hilton interview is from Explosive and is a bit newer and in HD, and it also has subtitles in German and English. The Franco Nero interview comes without subtitles, not sure where that one is from actually, it is Italian with German overdub (kind of like a German TV featurette). The interview with Fulci (which is audio only) is also from the Wild East disc, and as such has English and German subtitles, plus, it's also kind of bilingual as it is recorded in English. The audio commentary does not come with an additional English language subtitle. I haven't had time to listen to it, but judging from the previous works and writings of the two commentators, it should make for an informative 90mins.

The booklet texts are German, rather extensive and are garnished with tons of pictures from the movie. All in all, a great package for a really decent film. Pick from two different covers, dive into some Fulci and hum along to a great title tune.

Written by by Sebastian on the last day of #SpagvemberFest 2020.

A review copy of this release was provided to us by the distributor.

Retrieved from "https://www.spaghetti-western.net/index.php?title=Massacre_Time_BluRay_review&oldid=118514"
Category:
Cookies help us deliver our services. By using our services, you agree to our use of cookies.