The first spaghetti western directed by horror maestro Lucio Fulci, and the second of three from 1966 starring Franco Nero. It was meant to be an Italian-Spanish co-production, and Spanish actor George Martin was originally cast as the film's protagonist. But the Spaniards withdrew and then assistant-director Giovanni Fago proposed to contract Franco Nero, who had just finished a film called Django (1). The script, by Ferdinando Di Leo, is reminiscent of Return of Ringo, even if the film is not specifically set in a post-war society. It also has strong Freudian overtones (Fulci confessed that Raoul Walsh's Pursued was a source of inspiration), and a melodramatic plot-twist similar to Texas, Addio, Nero's third spaghetti western of '66.

Tom Corbett (Nero) is a prospector who is contacted by an old friend of the family, who asks him to come home immediately. The Corbett ranch is now property of the Scott family, and Tom's brother Jeffrey (Hilton) has become the town's idiot, who only lives for his bottle. While Tom is investigating the case, several of the people around him are murdered, but remarkably, the hired killers never try to kill him. According to his brother, they don't want to. Puzzled by all this, Tom decides to pay a visit to the Scott ranch, and talk to the family's old patriarch. But he is challenged by Scott junior (Castelnuovo), a bullwhip-wielding psychopath, who nearly beats him to death, but again his life is saved for some inexplicable reason. Jeffrey still seems more or less amused by all this, but then the old Indian servant of the Corbetts, who raised the two brothers, is killed, and Jeffrey decides to tell the full truth to his brother.

The film was a very important film for the career of at least three people. Fulci was still a second-rate director, only asked for minor productions, and if Massacre Time had failed, his career might have been over. For Nero its success was a confirmation of his bankability as a western actor, and the three movies he made this particular year, would catapult him to the position of most popular Italian star of action movies, previously taken by Giuliano Gemma. To Uruguayan actor George Hilton it was the beginning of a very successful career in the Italian film industry. In several interviews, Hilton has confirmed that he owes nearly everything to the part of the drunk in Massacre Time. He was a personal choice of Fulci, who probably selected him because Hilton had some experience as a stage actor and he wanted an expressive actor for the part. It certainly is Hilton's film. Nero, who wears No Name's outfit for Fistful of Dollars (minus the poncho), is not at his very best, mainly because the script keeps him passive for most part of the film. Ironically, Hilton was a bit of the odd man out on the set, not only because of his nationality, but also because he was the only one who had trouble with Lucio Fulci's behaviour, who used to shout at the actors and fling objects through the air when he was discontent .

Some have complained about the slow pace and the lack of action during the first half (or even two thirds) of the movie. The dialogue, at least in Italian, sounds a bit theatrical. On he other hand, the film is beautifully shot and Fulci's framings are often remarkable, making Massacre Time one of the best-looking films in the genre. Lallo Gori's score is lovely, with a infectious theme song called A Man Alone (Back Home some Day) and several variations on it throughout the movie. It has at least two sequences that rank among the most memorable of the genre: the infamous bullwhip scene, with Castelnuovo, dressed in virginal white, beating the living daylights out of Nero, and the hyper-violent, almost hypnotic final shootout at the Cross ranch, with a lot of original shooting angles, and Nero hovering over his opponents, making summersaults in mid-air and picking up a gun while landing on his feet. It's said that John Woo was inspired by it. The sequence is of course highly improbable, but Fulci clearly favours spectacle over credibility (even when he can't walk straight, Hilton shoots with utmost precision and knocks several opponents out!), so we'd better not complain about that.

Today the violence of Massacre Time is no longer an issue, but at the time of its release, it certainly was. The Italian censors ordered Fulci to make cuts in both the opening sequence (a man devoured by dogs) and the bullwhip sequence, and to remove a close-up of the two murdered Carradine girls. This cut version, with a length of 86 minutes, is called the Prima edizione. In 1970 the cut scenes were restored, but not completely: some originally cut fragments are still missing, but there's a lot of debate about their content. The restored version, with a length of little over 88 minutes, is called the Seconda versione, and actually the longest available. In 1977 a special 83 minutes version was presented, probably for television showings. It has no name, not even a number, and people are usually advised to avoid it.

Reviewed version: Italian Eagle Pictures DVD, which presents the film in its longest available version (seconda edizione) and in its original aspect ratio of 2,35:1. A full review of this DVD, and some notes on an interview - in Italian - with Hilton (an extra on the disc) is available here. 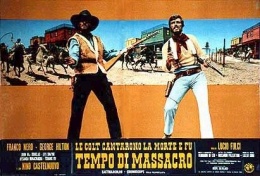 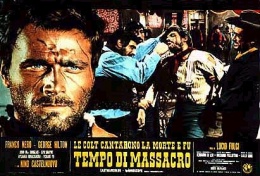 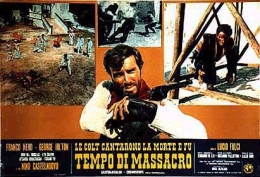 Retrieved from "https://www.spaghetti-western.net/index.php?title=Massacre_Time_Review&oldid=83959"
Category:
Cookies help us deliver our services. By using our services, you agree to our use of cookies.