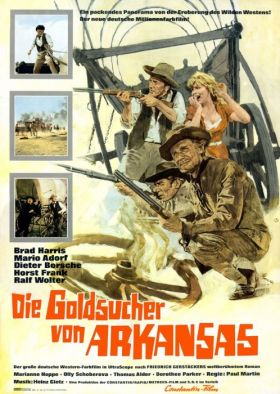 This is the middle part of a trilogy (very) loosely based on the works of German author of adventure novels Friedrich Gerstäcker, following Pirates of the Mississippi, followed by The Black Eagle of Santa Fe. The novel was based on authentic events in territorial Arkansas, but the historical accuracy was completely lost in this adaptation, which seems to be modeled as closely as possible to the Karl May movies. The role of the Mescalero Apaches, who finally come to the rescue of the citizens of Marble City, is similar in both the book and the movie (1). Although Gerstäcker's stories are said to be more authentic than those of his famous rival Karl May, both men seem to have shared the same romantic ideas about the noble savage.

Retrieved from "https://www.spaghetti-western.net/index.php?title=Massacre_at_Marble_City_Review&oldid=113507"
Categories:
Cookies help us deliver our services. By using our services, you agree to our use of cookies.