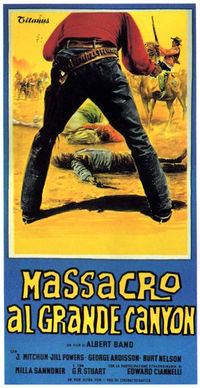 This is the first Western by Sergio Corbucci and you'll definitely notice it. It is very very American; the characters, the plot, the landscape and even the music. But these facts don't make it a bad western. The action is ok and James Mitchum in the role of good guy Wes does his best. The most annoying thing about this movie is the terrible music. There are parts where there are only some guitar shuffles which fit perfectly, but the main theme is awfully weird. Not comparable to il maestro Morricone's composings. Nevertheless it isn't a bad movie, but a rare one, and is a must see for Spag Western fans, because it is one of the first flics of the genre. --Lode 12:36, 17 August 2006 (CEST)

Sergio Corbucci on his contribution as director: "Massacre at Grand Canyon" is one of those mysterious films which are credited to me though I only shot some scenes. It was just a mercenary business. I took the money and went back to Rome." - (Sergio Corbucci a cura di Orio Caldiron, Ramberti Editore, Rimini, 1993.)

Retrieved from "https://www.spaghetti-western.net/index.php?title=Massacro_al_Grande_Canyon&oldid=131265"
Categories:
Cookies help us deliver our services. By using our services, you agree to our use of cookies.