Described as ‘John Ford on acid’, Matalo! (See Database page) occupies a seat of honour in the collection of curiosities of the spaghetti western. Telling a traditional spaghetti western story about villains falling out after a successful robbery, it tries to alienate the audience with its psychedelic rock score, anachronistic costume design, dazzling camera movements, out-of-focus shots, and political and sexual metaphors. In the opening scene, Burt, a hippy-like outlaw, is about to be hanged in a small western town, but he is saved by a hired gang of Mexicans. Even such a simple premise, is turned into an outlandish sequence when the liberated Burt is confronted with a mourning woman, who first wants to shoot him, then answers his kisses, and finally commits suicide (!) when he walks away from her. The next scene, is even more unsettling: instead of being grateful, Burt shoots the Mexicans in the back when they ride away.

The shooting-in-the-back-scene is probably a metaphor for the ingratitude of the Capitalist world towards third world people it has mercilessly exploited. The scene is "mirrored" in the film’s finale, when Lou Castel uses boomerangs, Third World weapons, to beat the intruders. Anyway, Burt joins two of his friends, Ted and Phil, plus Mary, a woman hanging out with the boys, in a ghost town and together they set about to rob a stagecoach. During the robbery Burt - who seemed the protagonist of the movie - is shot and left behind, and we won’t see him again until very late in the movie. The others take the loot to the ghost town, where they are joined by a mysterious stranger (Castel) and a woman who has lost her husband in an accident. There's also an old woman, the only inhabitant of the ghost town, who wants to rebuild the place and joins hands with the stranger in order to chase the ohers. The two seem to get the upperhand, but then Burt enters the scene again … 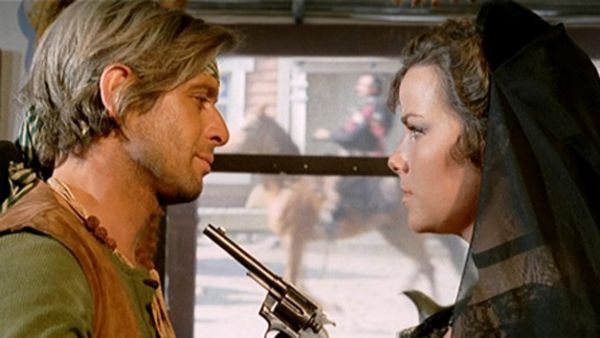 Canevari was an independent film maker who had worked on a western before, the obscure Per un dollaro a Tucson si muore, but he is best known for Io, Emmanuelle. The film is often called the first Emmanuelle-movie, but is apparantly not related to the movie starring Sylvia Kristel (*1). Expectations were high for Matalo!, but the movie failed miserably at the box-office. Hippies didn’t visit westerns, and western fans didn’t like hippies. But it found its audience more than a decade later thanks to VHS. Although Matalo! is a remake of Kill the Wickeds, it is quite unique. Often it doesn't feel like a western at all, but rather like a biker movie such as The Wild Angels or Easy Rider, the gang members acting like 19th Century Hell’s Angels. Most story elements from the original script were respected, but one minor change seems quite essential: in the original film it was not the ‘Burt character’ but one of the others (the Braxter from this movie) who was to be hanged in the opening scene. It is a definite improvement: by book-ending the film with his presence, Pani really becomes the central character of the narrative, even if he is absent during the bulk of it.

Canevari stated that the expunged all dialogue from the original script, until only one line was left, the infamous order ‘matalo!’, spoken to a kid during the stagecoach robbery (1). This is not true, but dialogue is indeed very sparse. After the first twenty minutes, the narrative fades into the background, making way for a series of erotic and violent scenes with strong sado-masochistic overtones, often featuring the incredibly sexy Gravy subjugating the men in her company with her seductive, provocative behaviour. We soon understand that the 'absent' Burt, is not absent at all: Mary has secret conservations with him and from time to time the barrel of his gun penetrates the screen, in glorious erection (Sometimes a gun is just a gun, but it’s very hard to miss the Freudian symbolism here). When Burt finally shows his face again, Gravy immediately starts kissing him, echoing the scene with the mourning woman in the opening minutes. 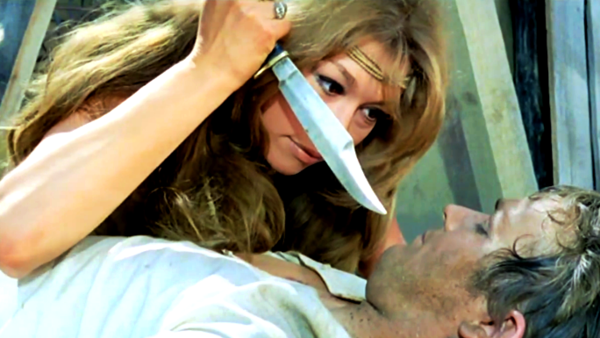 Matalo! is often too weird for its own good, feeling more like a trip than a real movie, but for me this outrageous exercise in hallucinatory madness seemed to work - to some extent. It’s hard to say anything about the quality of the performances. Pani and Salines act hyperactively, but they were clearly asked to do so (and maybe they were under the influence). Castel, on the other hand, remains very passive until the finale. This finale with the boomerangs is oddly inadequate, even a bit laughable and the rock score - a fusion of a whining Jimmy Hendrix style guitar, pulsating Iron Butterfly rhythms and early Pink Floyd experimental sound effects - will drive some people crazy. Moreover the psychedelic, ‘hip’ look of the movie – including bell bottoms, hot pants and flower power regalia - give the film a dated look. If you’re looking for an unusual, but still rather straightforward spaghetti western, try Kill the Wickeds, if you’re looking for something completely different, this might be the film for you.

Retrieved from "https://www.spaghetti-western.net/index.php?title=Matalo!_Review&oldid=131825"
Category:
Cookies help us deliver our services. By using our services, you agree to our use of cookies.